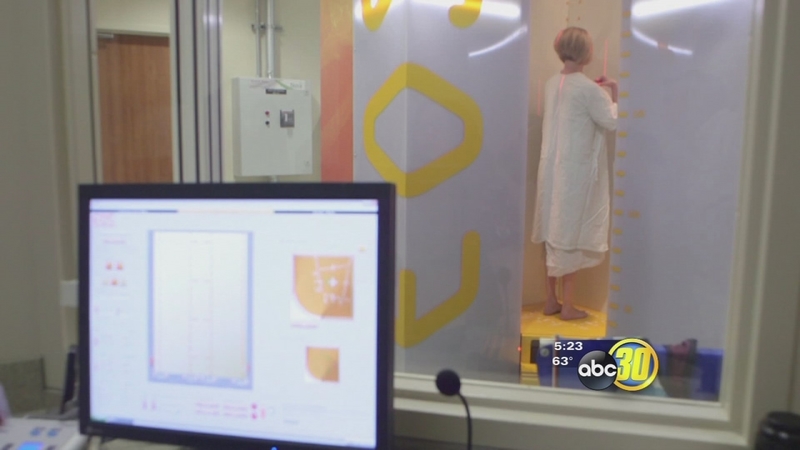 TEMPLE, Texas. (KFSN) -- Scoliosis, or a curvature of the spine, is a structural problem affecting as many as seven million Americans. While it affects both genders, females are eight times more likely to require treatment, including braces and spinal fusion surgery, and that can mean dozens, even hundreds of X-rays. Now, there's finally a breakthrough in X-ray technology.

Scoliosis patient, Amy Cominsky remarked, "I will have more confidence that the doctors will be able to see more, with better images."

The EOS scanner is a three-dimensional system that scans patients in a natural, standing position. It allows orthopedic specialists to get the most accurate view of the spine with the lowest dose of radiation possible.

"It's 80 percent less, or one- fifth of the radiation involved with the old type of x-rays," explained Mark Rahm, MD, Orthopedic surgeon at Scott & White Memorial Hospital in Temple, Texas.

The thirty-four-year-old Cominsky had surgery to repair her scoliosis when she was 15. She's had more than 200 X-rays.

Dr. Rahm told Ivanhoe, "The new machine takes an individual X-ray of each bone as opposed to the old way, where the amount of radiation wasn't right for each individual level."

Doctors say other advantages of the EOS scanner include clearer pictures, simultaneous scans of front and side and improved surgical accuracy and precision.

Inspired by her own medical condition, Cominsky became a surgical technician. She sees on a daily basis how the EOS scanner is improving the diagnosis and treatment of scoliosis patients.

"It's such an improvement in technology and the pictures itself are so much clearer," said Cominsky.

Too much exposure to radiation can lead to cataracts and in some cases, cancer. The EOS scanner is only available in about 25 hospitals so far, but those numbers are expected to increase.