Fresno Co. COVID-19 cases double in last 2 weeks, restaurant and bar owners fear they may have to close again

Fresno County health officials say they're working closely with nursing facilities and the Avenal State Prison, which contribute to the numbers.
KFSN
By Nathalie Granda 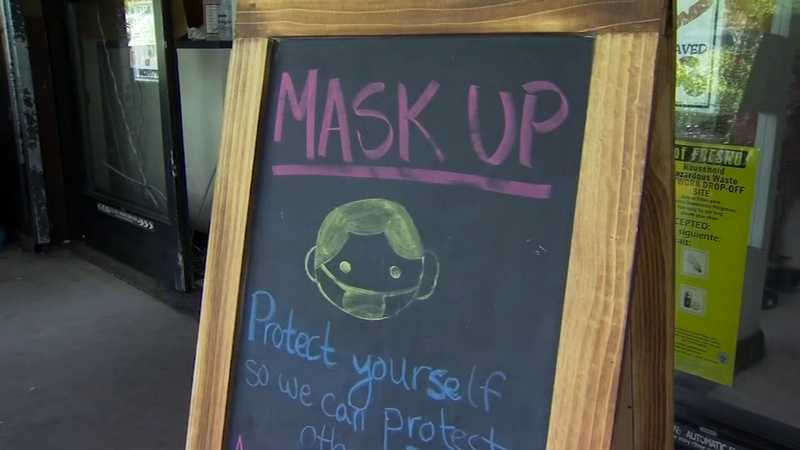 FRESNO, Calif. (KFSN) -- Fresno County is now on the state's radar after seeing a doubling in cases over the last couple of weeks.

Health officials say they're working closely with nursing facilities and the Avenal State Prison, which contribute to the numbers.

Dr. Rais Vohra with the county's health department says the prison may be driving up numbers because some of the staff live in Fresno County.

"Our doubling time is about two weeks. That's concerning. We were out to three weeks at one point and now it's shortening," Dr. Vohra said.

The county now has 2,216 cases - more than 100 new cases since the county health website posted their numbers on Saturday.

The increase in numbers has gotten the attention of the state.

Vohra says Fresno County is on a targeted engagement watch list in which they're working with the state to determine the challenges and what needs to be done to lower numbers.

"We will be able to get more leverage from state and increasing testing capacity, providing more resources for our at-risk residents," says Vohra.

The health department is also working with Avenal Prison despite it not being in county because employees from the prison are in their region.

The increase comes as the state has allowed more businesses like gyms, schools, and bars to reopen.

As far as whether the increase in cases will impact more local businesses from reopening, Vohra says that remains a mystery.

"It's a concern. It's something we want some clarification from the state on what the implications are."

Meanwhile, Vohra says it's possible we may see a second peak in cases closer to July or August.

Fresno beer bar Out of the Barrel is back to pouring pints for their patrons after months of an empty taproom.

Nick McFarlin says they had a permit to sell cans and bottles of beer during the pandemic to stay in business but they had to make a lot of changes to welcome back customers.

"(We) put in an oven and a freezer to be able to serve food, let alone all the permitting allowed for that. We could've waited to this week to reopen, but every day is lost money so we were willing to do what was needed to get back in the game," he says.

The taproom is one of the many businesses welcoming back customers after weeks of closure.

The possibility that Fresno County may have to lock back down due to the spike in cases could have a big impact on businesses like Out of the Barrel.

"It would be a huge blow. We've invested a lot of money into the equipment and permits," says McFarlin.