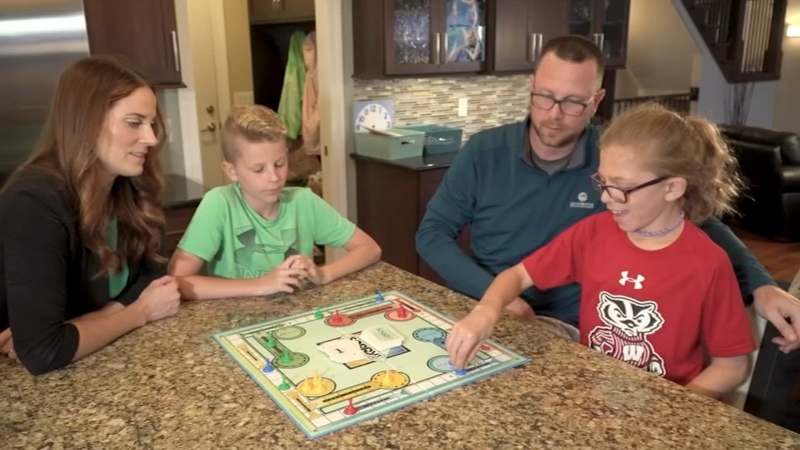 MADISON, Wis. (KFSN) -- Imagine doctors telling you that your child does not only have a genetic disease like NF1, but a disease that has no effective way to test for therapies or even predict how the disease may progress. Now researchers at the University of Wisconsin, Madison believe they have found a way to get these kids and their families the help they need.

Like a lot of girls, nine-year-old Lauren Geier loves playing with her dolls.

Ryan Geier, Lauren's dad, said, "She is the most motherly figure you will ever meet. She babies these things like they're real kids."

But unlike most kids, Lauren has a rare form of neurofibromatosis type one, or NF1, in which there is a microdeletion, or a chunk of her chromosome is missing.

"Her diagnosis is more like one in 80,000. There's no blueprint. There's no way to understand fully what's going to happen," said Ryan.

Most people will have some level of behavior or learning disabilities and are prone to getting nerve and brain tumors. But NF1 is complex and different from person to person.

"The biggest hurdle in this research area has been is that there was no real way to study the disease because there aren't enough children with the same mutation," said Dhanansayan Shanmuganayagam, PhD, Director of Biomedical & Genomic Research Group at the University of Wisconsin - Madison.

But now, researchers are using genetically engineered pigs to study the disease. Using the gene-editing tool CRISPR, the researchers genetically alter the embryo of a pig and then impregnate a female pig with the embryo.

"we're trying to create a pig that sort of represents a particular child. And therefore, we can really customize the treatment or the therapy," said Shanmuganayagam.

The first set of piglets were born in November 2016. There were eight in total and four of the piglets carried the NF1 mutation. That was a win for the Geier family.

"When we heard there would be a possibility of creating essentially a twin pig that has this microdeletion, it gave us hope," said Lindsay Geier, Lauren's mom.

And a little more insight into the NF1 disease.