Marijuana's impact on our health 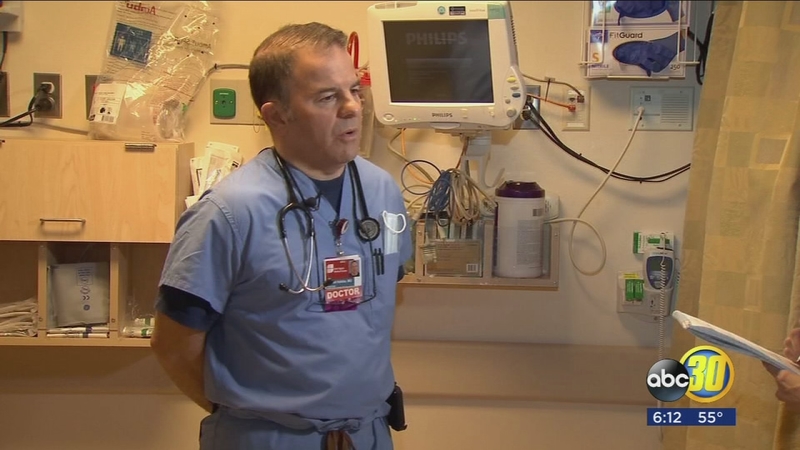 Marijuana's impact on our health

FRESNO, Calif. (KFSN) -- Some Valley doctors are concerned about the rise of a mysterious illness that's been connected to cannabis.

Shane from Hanford walks into the Fresno office of 420 Compassionate Care MD to get his medical marijuana card.

Cannabis the only remedy that works for health problems that have plagued him for years.

"It helps me sleep it lowers my anxiety I have PTSD, it calms me with that. It helps (keeps) me from taking pills that I feel I don't need, I don't like the side effects of it," Shane said.

This 40-year old father of three says he's a responsible user but the continuing stigma surrounding medicinal pot makes him feel like a criminal.

"It's a stereotype how they look at you, it's like you can be an alcoholic and it's fine but you're using medical marijuana in your own home and not out in the public and they do look at you in a certain way."

Patients like Shane and marijuana advocates are hoping that stigma will ease the legalized recreational adult use of cannabis in California.

Leslie Ann Eller, the Assistant Deputy Director of Central Valley California NORML which stands for the National Organization for the Reform of Marijuana Laws, believes Prop 64 is a giant leap forward toward legitimizing the health benefits of cannabis.

"The guidelines for Prop 64 has totally changed the waters, the tide is coming and it will be interesting to see where it take us," Eller said.

Even though medical marijuana has been legal in California with the passage of Prop 215 in 1996, access to it is still difficult for patients in cities that still ban dispensaries.

and not a gateway into them.

Eller said, "It's going to reduce the amount of people going to the ER because it's going to give them an alternative way for that stress, anxiety."

As marijuana advocates continue to promote their health benefits, the ER beds at this Fresno hospital are filling up with more cases of a mysterious syndrome that may be associated with marijuana.

When Dr. Michael Habibe isn't working in the ER of Saint Agnes Medical Center in Northeast Fresno, he speaks at community discussions about the rise of cannabinoid hyperemesis syndrome commonly called scromiting. A combination of screaming and vomiting from immense pain and relentless wretching.

It's a rare but increasingly troubling illness, more doctors say is likely linked to the regular use of marijuana.

Critics say there's no hard evidence of a link and other factors such as contamination or allergic reactions could be to blame but Dr. Habibe says he has patients who are suffering from the syndrome when no other medical reason can be found.

"Intense nausea, which causes severe cramping and pain. It could be very unpleasant, some of them can be rolling on the floor, trying to induce self-vomiting on the bed," Dr. Habibe explains.

Dr. Habibe said, "As long as that trend continues, where it's more available, we would expect to see it get worse.

The health side-effects of habitual pot use are treated at West Care, a health and human services organization that specialized in addiction treatment and recovery.

Senior Vice President Shawn Jenkins is most concerned about young people who will now have greater access to legal pot.

Jenkins says most of the adolescents being treated at West Care, have a pot problem.

As the debate continues over cannabis as a gateway into drugs or a gateway out of them both advocates and critics agree the potent euphoric compound THC, is much higher in today's strains of marijuana than it was, decades ago.

And the health effects of that remain to be seen as more people light up or consume, legal marijuana.

Many valley doctors are also concerned about children having access to marijuana in the home, as more people try legal pot, especially in the form of an edible.