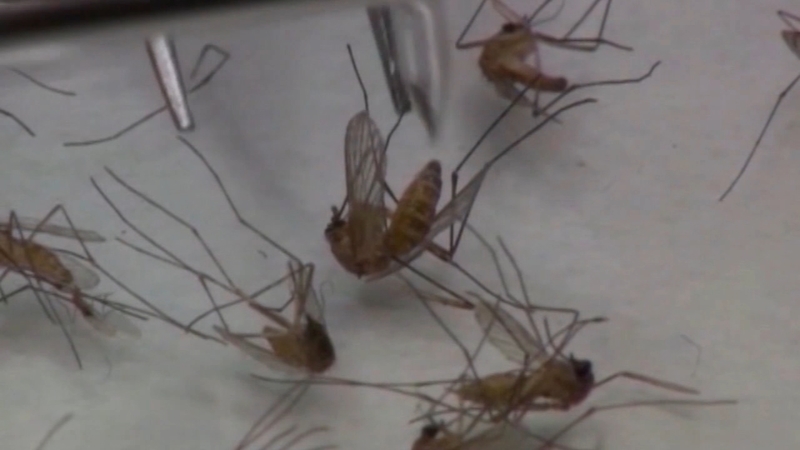 FRESNO, Calif. (KFSN) -- The Central Valley may be seeing the re-emergence of St. Louis Encephalitis in its mosquito population. The Fresno County Public Health Department is stressing the importance of mosquito prevention, now that two of those pests have tested positive for the virus in Central Fresno.

Symptoms of SLE are mild and flu-like, however, should they persist longer than 15 days it's time to see the doctor. Community Health Division Manager Joe Prado says, "if your symptoms go from mild flu and get into disorientation, loss of consciousness, you want to see your provider because you can ultimately have inflammation of the brain there could be paralysis as well."

In the last ten years, there have only been three human cases, in California, and all three were in 2016.

Public Health is teaming up with the mosquito abatement districts making sure they have heightened prevention. It comes after traps pin-pointed two Central Fresno locations with mosquitoes that tested positive: N Floradora and Highway 41 and the Shields and Van Ness neighborhoods.

Last year at this time there were a total of 4 mosquitoes found in the State of California that tested positive for the disease. Fresno Mosquito and Vector Control District Manager Ryan McNeil says, "This time of year there are 29 positive tests... all of them being within Fresno, Kern and Tulare County."

Fresno Mosquito and Vector Control does biological control with mosquito fish that eat larvae from ponds and pools. They do physical control by looking for breeding sources with aerial surveys and house calls. They also do chemical controls with an oil based spray.

McNeil adds, "We've had mosquitoes that have been able to breed in just a teaspoon of standing water. Even a bottle cap that's left right side up."

Personal protection like long sleeves and pants and repellant with DEET go a long way.

And as if bites and risk for disease aren't incentive enough to get rid of any standing water, McNeil says, "two mosquitoes in a six month period of time can end up producing 9,000,000,000,000,000,000,000,000,000,000 (nine nonillion) mosquitoes."
Report a correction or typo
Related topics:
health & fitnessfresno centralhealth watchmosquito
Copyright © 2021 KFSN-TV. All Rights Reserved.
HEALTH WATCH