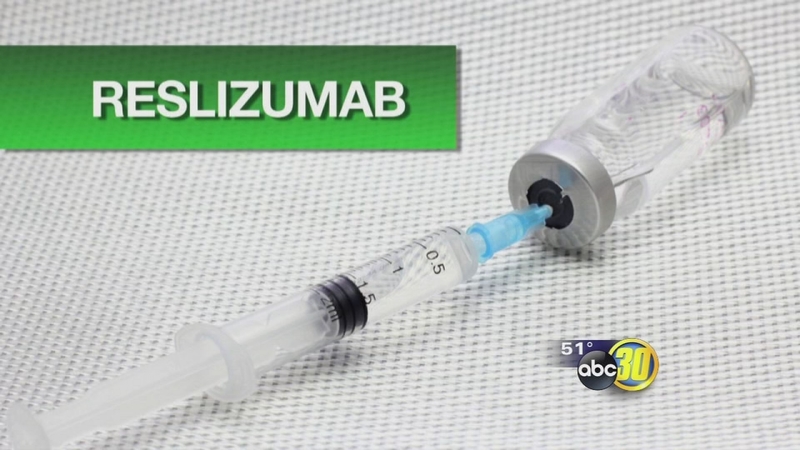 ST. LOUIS. (KFSN) -- Imagine struggling to fill your lungs with air and with each breath, feeling like you're suffocating. That's what happens to more than 18-million Americans who suffer from asthma. Medications, shots, inhalers and steroids help most people keep it under control. But for some people that just isn't enough. Luckily, there's a new drug that may get them breathing easier again.

No matter what Roxane McWilliams is doing, she always knows where her inhaler is.

McWilliams told Ivanhoe, "I may be outside and someone's cutting grass and boom! There it is."

For some, inhalers and steroids don't work. Now, researchers at Washington University School of Medicine in St. Louis have found a new drug - Reslizumab to prevent attacks from happening. It goes after the molecule that causes asthma.

Mario Castro, MD, MPH, a pulmonologist at the Washington University School of Medicine in St. Louis explained, "The antibody is basically a protein in that injection that will bind up all those molecules that are in your blood stream. It doesn't allow that molecule then to bind to your lung tissue and to your wind pipe so it can't cause the inflammation."

An injection once a month was given to hard-to-treat asthma patients. Their inflammation went down and they had a 50 percent reduction in severe asthma attacks.

"It takes some of our severe asthma patients from being really out of control to being well-controlled," Dr. Castro said.

Compared to steroids, there are few side effects just a risk of infection at the injection site. The downside, steroids work within two hours, the new drug takes two weeks to work. But Roxane says it would be worth the wait.

Doctors are hoping this new drug will be available within the next two years. Reslizumab will not work for everyone, but a simple blood test will show who it will help and who it won't.

BACKGROUND: Asthma is a chronic disease of the lungs where the airways are affected by allergens and other environmental triggers. The body responds to triggers in two ways, through a hyper reactive response and an inflammatory response. During the hyper reactive response the lungs narrow and contract, making it difficult for the patient to breathe normally. The inflammatory response then follows, causing the body to release white blood cells and produce thick mucus. Asthma triggers can include cigarette smoke, dust mites, mold, pets and pollution. It is estimated that 18.7 million adults and 6.8 million children suffer from asthma. According to the CDC, nearly 9 people die from asthma each day. (Source: http://www.cdc.gov/asthma/default.htm, http://www.nytimes.com/health/guides/disease/asthma/background.html)

TREATMENTS: In addition to identifying and avoiding triggers, there are some medications that can help control the disease:

Quick-Relief Medication: These are medications that can open the lung's airways and relieve any moderate to severe asthma attack. Quick-relief medications include inhalers, bronchodilators, corticosteroids (taken orally) and anticholinergic drugs. Typically, the inhaler or bronchodilator contains a short-acting drug called beta-adrenergic agonist and only treats the symptoms, not the actual disease.

Long-term Control Medications: For patients that have fewer, less severe asthma attacks, doctors may prescribe a long-term control medication to help regulate the chronic symptoms of the disease like inflammation. These medications can include inhaled corticosteroids, leukotriene modifiers and combination inhalers that contain both a corticosteroid and long-acting beta agonists (LABAs). (Source: http://www.mayoclinic.org/diseases-conditions/asthma/in-depth/asthma-medications/ART-20045557, http://www.nytimes.com/health/guides/disease/asthma/treatment.html)

NEW TECHNOLOGY: A recent study performed at the Washington University School of Medicine in St. Louis, found that a new drug, reslizumab, has reduced the risk of severe asthma attacks in patients that have not found relief through traditional medications. Patients in the study had high levels of a type of white blood cell called eosinophils. These white blood cells contribute to the inflammation caused by triggers in asthma patients and are suspected of increasing the severity of the attacks. Pulmonologist and principal author on the study, Mario Castro, MD, MPH, estimates that 30 to 40 percent of asthma patients have high levels of eosinophils in their system. (Source: https://news.wustl.edu/news/pages/investigational-drug-reduces-asthma-flareups.aspx)

Dr. Castro: We estimate, overall, about eight percent of the population has asthma, a little bit higher in kids. And then, severe asthma represents about ten to twenty percent of overall asthma.

Dr. Castro: Patients with severe asthma are really disabled. Often, patients with severe asthma are debilitated from their disease by shortness of breath, wheezing, and chest tightness that really restricts what they're able to do in daily activities. They find it difficult to just going shopping or going outdoors because they encounter things that will trigger acute asthma attacks.

I think when people think of asthma they don't ever think of it as something that can really almost destroy your life.

Dr. Castro: People often think that asthma is a chronic disease. It's just something that you live with, but it can actually be quite disabling from the standpoint that some of my patients can hardly leave their house. They're so fearful of encountering somebody that's smoking a cigarette or someone wearing perfume that they really restrict their activities. And unfortunately, a lot of our patients miss going to work or school just because their asthma is flaring up and they can't make it there.

Is there a reason why a certain medicine doesn't work for some patients' asthma?

Dr. Castro: We know that, fortunately, the vast majority of asthma is triggered by allergies and we have ways to control those allergies and the inflammation that occurs in asthma. Those medicines work very well and are usually inhaled steroids that decrease the inflammation in the bronchial tubes, so our patients can control their asthma and breathe better. But, there is a group of patients that even when we try to use those "state of the art" medications, they just don't respond to them. Then we start resorting to giving even higher doses of those medicines, often orally, in a form of steroids and we know that works but there are so many side effects from them.

Dr. Castro: The main things that our patients complain about are weight gain, fluid retention, and not being able to sleep. It can also contribute to high blood pressure, diabetes, thinning of the bones, and thinning of the skin. Many different serious complications, so we'd like to avoid using steroids for long periods of time.

And now there's a new investigational drug out there?

Dr. Castro: Yes, there is now a new class of medications that we call biologic therapy. These are medications that are injectable and bind to molecules that are in the blood, called cytokines. They're inflammatory proteins in your body that are being released because of allergies or asthma. In the past, the steroids would dampen them but, as I mentioned, the steroids have side effects. So the idea is: could you give a biologic therapy that will tackle that specific molecule? The investigational drug that we looked at here in this study is called reslizumab, or RES. It's a specific monoclonal antibody against a cytokine called interleukin 5. Interleukin 5 is a very common cytokine in patients with allergies or asthma that causes inflammation in the windpipes of our patients with asthma.

How does it work?

Dr. Castro: The antibody is basically a protein that is injected and will bind up all those molecules that are in your bloodstream so it doesn't allow that molecule to bind to your lung tissue or your windpipe, then it can't cause the inflammation. And what we see when we treat these patients is that their inflammation goes down. The particular type of white blood cell that we're inhibiting is called the eosinophils, and we see that the eosinophils levels go way down in the blood stream and in the airways from our patients that are being treated with reslizumab.

So this RES, is it given once a week?

Dr. Castro: It's given every four weeks, once a month, by injection. Most of the biologic therapies are in that time frame, where we have to give it about once a month or every couple of weeks. And this therapy suppresses those eosinophils and the IL 5 and it's sustained over that one month period of time.

How do the patients react to this, has it reduced their flare-ups?

Dr. Castro: Yes, the main effect we see is that it takes some of our severe asthma patients from being really out of control to being well-controlled. They're not having those repeated attacks where they have to go on steroids or go in to the emergency room or the hospital. We find that this really kind of calms things down, stabilizes their disease and it takes away that inflammation that's triggering their underlying problem. In the reslizumab study that we completed, almost a thousand patients were randomized and we saw that there was about a fifty percent reduction in severe asthma attacks. These are attacks that would have required steroids, or an emergency room visit or hospital stay.

Are there any risks to these biologics?

Dr. Castro: The main concern whenever we do an injection with a biologic therapy is a reaction at the injection site and we saw some patients with reactions. Usually, those are very mild and they resolve with time. This is very well tolerated and we feel that this is a very specific therapy that doesn't have all those side effects that we see from the oral steroids and it still controls the underlying problem. We also noted that patients' lung function improved, which, as a lung doctor, that's something I want to see! I know patients with severe asthma see their lung function begin to decline over time and I'd like to improve lung function so that they can have better quality of life.

And no risks with the biologic, with RES?

Dr. Castro: With the biologic, the main side effect we saw was the injection site reactions. Out of the almost thousand patients treated there was one allergic reaction and that was treated. It was significant so it is something that will always be administered in a doctor's office because of the possibility that you could have an allergic reaction to the medication.

So, could this replace steroids?

Dr. Castro: I don't think so because it's not as quick-acting as steroids. It's not likely going to be as inexpensive as inhaled steroids.

How fast does this work?

Dr. Castro: It will take usually a few weeks for this to work because it has to work throughout your body and lower those eosinophils counts. But over time the idea is that it will control that inflammation and you won't have all those repeated attacks.

Is this treatment that could be used for other conditions that have inflammation?

Dr. Castro: Yes. It's being looked at for other diseases that are being caused by increased eosinophils, the white blood cells. There are other types of allergies - like allergic skin diseases or allergies that can affect your esophagus, your swallowing tube. There are other conditions that we've seen eosinophils being part of the process there that we believe that this medication would be helpful for.