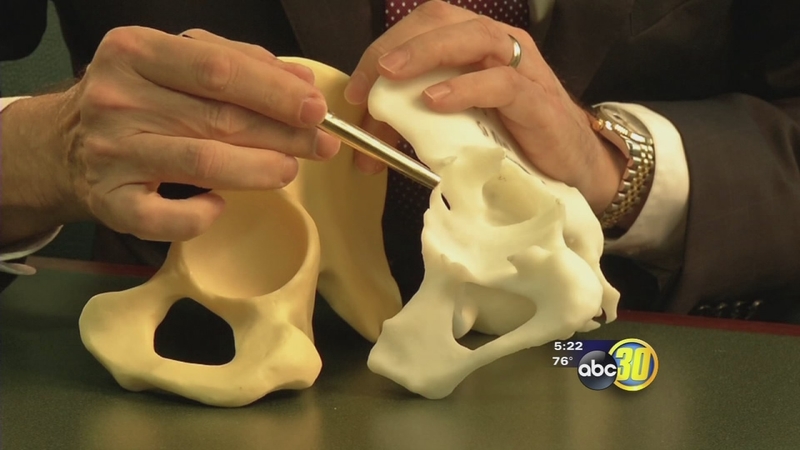 CHICAGO. (KFSN) -- More than 2.5 million Americans are living with an artificial hip. For those with a failed hip replacement, many are either too afraid to have a revision or don't know what can be done and instead live with the pain and disability. But there is hope. Now, 3D technology is helping surgeons plan and perform the surgery better than ever before.

Enjoying a stroll with her son is something Joanne Karas couldn't do for years.

Karas told Ivanhoe, "Every time you stepped on that side, it was a pain."

Born with a congenital hip defect, she underwent surgery at 12 months old, and she was fine until she hit her 40's.

"I was 43; I couldn't do what I wanted to do. I couldn't lift things carry things, any extra weight was a problem," she explained.

She had her hip replaced and resumed life. Twenty-two years later the pain was back.

Karas said, "And then I really started having a lot of pain, significant limping."

One leg had become noticeably shorter than the other. "Probably about an inch and a half," she said.

Her replacement was failing. That's when she met Henry Finn, MD, FACS, Professor of Orthopaedic Surgery and Director of the Chicago Center for Orthopedics at Weiss Memorial Hospital and the University of Chicago.

Dr. Finn told Ivanhoe, "Her socket had moved into a vertical position. Instead of being at a 45 degree angle, it had moved vertically, it was loose and she had developed these bone defects."

Dr. Finn explained, "You can see where there's hardware and you can see what the bone deficiencies are, but more importantly you can actually hold the pelvis in your hands and plan for the surgery."

With the model in hand, he focused on an advanced technique.

"It makes the surgery go quicker, more reliable and sometimes it enhances the recovery for the patient," he said.

Using a device called the cup cage construct to reconstruct Joanne's deteriorated hip, Dr. Finn put her back on her feet again.

Karas told Ivanhoe, "If you need to have it done, just do it and don't be afraid." For Joanne, it was the right step to make.

Dr. Finn says about 60,000 hip revisions are performed in the U.S. each year. He says only time will tell how long the new hips will last given this newest technology and technique.