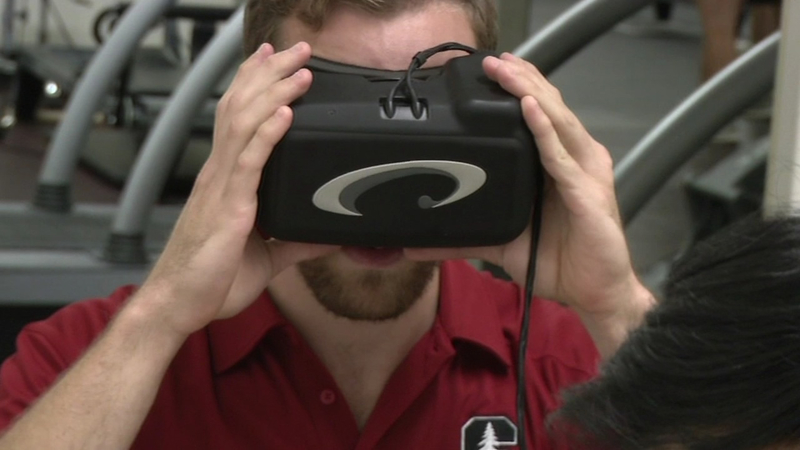 STANFORD, Calif. -- A Bay Area college football program is introducing one of the most innovative systems in the country to detect concussions.

Anyone can imaging suffering a concussion on the football field, but it turns out that diagnosing one isn't as easy. "The problem with a concussion is that no one really knows what a concussion is and part of that problem is because there is not a diagnostic tool to help us define what that is," Stanford Athletic Training Director Scott Anderson said.

But now a research team at Stanford is testing a sideline system that could be a game changer. The technology works by tracking an athlete's eye motion as they watch a dot traveling around a circle.

Stanford neurology professor Jam Ghajar, M.D., developed the system and believes it's more accurate than tests based on memory or reaction time. "We're looking at your ability to focus because that's the main thing that's impaired after a force to the head," Ghajar said.

Ghajar's team tested the concept with soldiers in Afghanistan as well as athletes. Recently, they were able to scale down the desk top version into a portable model that will be used on the sideline of every home football game this year at Stanford. They believe the speed of the evaluation makes it practical in a fast paced environment. "All the software in here that analyzes a signals and gives you a score, all this is done within a minute, very quick," he said.

"We're excited to perhaps diagnose concussions on the sideline in a quick manner," Anderson said.

Players who are flagged with possible concussions will then undergo further testing by Stanford's team doctors before returning to the field.

Ghajar is hoping the system also helps prevent secondary injuries that can follow a concussion. "They're playing a very active game, players are coming at them and if they don't know where they're coming from, you can't track them then they'll get another injury.