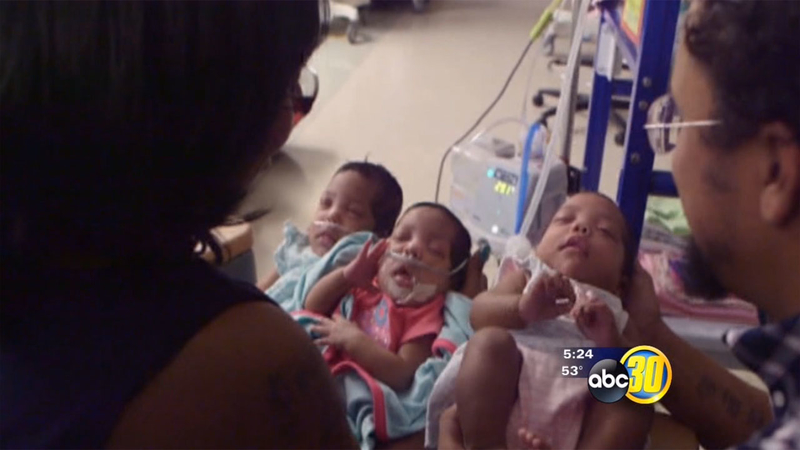 DALLAS. (KFSN) -- One in 10,000. That's how rare it is for a certain type of twins, mono-amniotic ones to be born. They are identical babies sharing the same embryonic sac. Now, add a third fetus and the risks to mom and the babies increase tremendously.

Lesheca and Gregory Lynch hold their four-month-old triplets for the very first time - Zacarri, the fraternal baby and identical twins Adrianna and Zaniya, who shared the same sac. Zaniya just got her breathing tube removed.

Lesheca told Ivanhoe, "They were both in the same sac; that was their biggest concern because their cords could wrap at any time and kill them, and then just having three babies in your body, that's a lot on your body."

Several times doctors wanted the Lynch's to reduce the pregnancy to protect the surviving baby and Lesheca, but she said no every time.

"To me, if God gave me these babies, I'm not going to make that decision to get rid of them, so I would deal with whatever comes, and my babies are here, and they are good and healthy, well working on it," she explained.

Before birth, the twins faced all sorts of risks - from umbilical cord entanglement to a syndrome where one twin gets the majority of nourishment and the other becomes under-nourished. The triplets were delivered prematurely in an emergency C-section after 28 weeks.

Rebecca Ballard, MD, Neonatologist at McLane Children's Hospital Scott & White in Temple, Texas told SubmitIvanhoe,"It's a very serious discussion that the OB's would have with the mother. And, we were worried, about these, especially the mono-mono twins, the triplet pregnancy, but overall, we've been really pleased with their progress."

Women facing multiple births should: develop a good relationship with a specialist, make plans to deliver in a hospital with a tertiary care - level three or four NICU, and tour the NICU before you deliver.

Zacarri and Adrianna came home first. Zaniya just left the NICU. The Lynch's now have five girls, and have some advice for families facing multiples.

Gregory said, "Prepare for a roller coaster, but it's worth it."

The triplets will be monitored closely, especially during the first two years of life. Premature babies are at risk for lung disease, pneumonia and viral infections. And they may face developmental issues involving speech and learning. Still, the family is very happy that they are here.