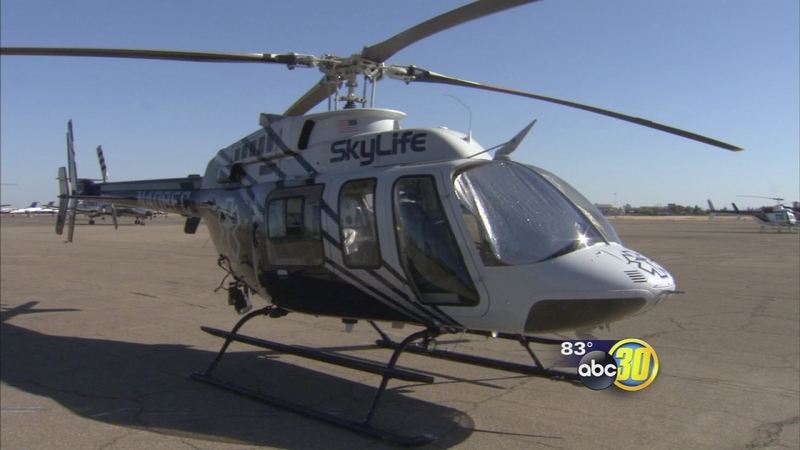 A call to air traffic control from 1,000 feet above Fresno: "Medivac, we almost got hit by a drone. Just letting you know up here," a SkyLife pilot said in a taped recording.

It was a very close call for SkyLife One, for the pilot, the crew and a patient on board. "We didn't see it until it pretty much got right up on us; it passed right behind us," the pilot said.

John McGrew is a flight paramedic and he was in the chopper. "The split-second thought is, you know, this guy is a little too close; this could be a serious problem," McGrew said.

He says the pilot spotted the drone and dodged with a controlled turn. Still, it almost hit the helicopter's rotor and just missed it by roughly 20 feet.

"With the training we receive, we're very aware of what's going on around us," said Vince Ellis, a flight nurse who was also on board. "I think that's what mitigates these risks."

According to Federal Aviation Administration rules, the drone was in a no-fly zone. Operators are not allowed to fly above 500 feet or within five miles of an airport.

"User error, user ignorance, the user just going off and doing whatever they feel like," said Chris Geiger, who is a UAV enthusiast.

Geiger knows the rules and says there's no excuse for getting in the way of a SkyLife helicopter. "It's like driving down the road, seeing an ambulance in your rearview mirror and nobody is pulling over," said Geiger.

SkyLife One was on its way to Community Regional Medical Center. Fortunately, the close encounter was brief, and the patient was dropped off safely.

Airport police also responded to the call but couldn't find the drone or the operator. The FAA is investigating the case.