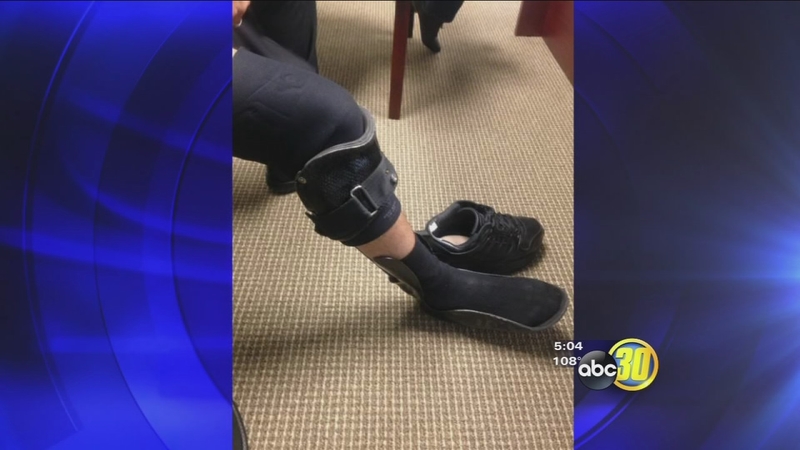 FRESNO, Calif. (KFSN) -- A true American hero says he was treated like a common criminal at the gates of one of central California's national parks.

Dominic Esquibel says he was roughed up by a ranger at Kings Canyon National Park. The ranger apparently didn't believe Esquibel was handicapped. But the Marine has a major war injury and now, a claim against the government.

When Marines took Fallujah in Operation Phantom Fury, one of the biggest heroes was Dominic Esquibel. The lance corporal earned the Navy Cross for exposing himself to machine gun fire three times while saving two fellow Marines and helping to end an ambush. But Esquibel chose not to accept the second highest military honor.

"He is not someone seeking attention, not by any means a whiner as you can see from his military record," said Fresno attorney Butch Wagner, who represents Esquibel in his claim against the government.

Seven years after Fallujah, Esquibel stepped on an IED in Afghanistan. It tore off his heel and part of his ankle. But Esquibel battled to get back on his feet.

"He wears an exoskeleton, which is a type of a sophisticated brace that pretty much holds his leg in check so he is able to walk," said Wagner.

The Marine was using his device when he visited the Valley around Christmas 2012. Esquibel says he arrived at the gate of Kings Canyon National Park. It was winter, so the gate employee told him he needed snow chains if he wanted to go all the way into the park. And if he wanted to just take a picture, he had to wait for the traffic to die down.

So, he took a U-turn around the gate, and drove over to the handicapped spot. That's where he parked, put up his handicap placard, got out of his car and that's when his trip took a downward spiral.

In a complaint to the federal government, Esquibel says park rangers questioned his disability and arrested him. He says one ranger handcuffed him and kicked his injured leg. Esquibel says he was jailed in Fresno and although charges were eventually dropped, his injuries got worse and the incident may do what the IED didn't.

"When the ranger kicked him, it aggravated his condition, his vascular condition and he's been having more trouble with that leg than he normally does," said Wagner.

He says Esquibel could lose the leg, but Marine doctors are trying to save it.

A spokesperson for the park tells Action News the claim is being evaluated, but they can't discuss it.

If the government denies Esquibel's $750,000 claim, he'll file a lawsuit as soon as August.