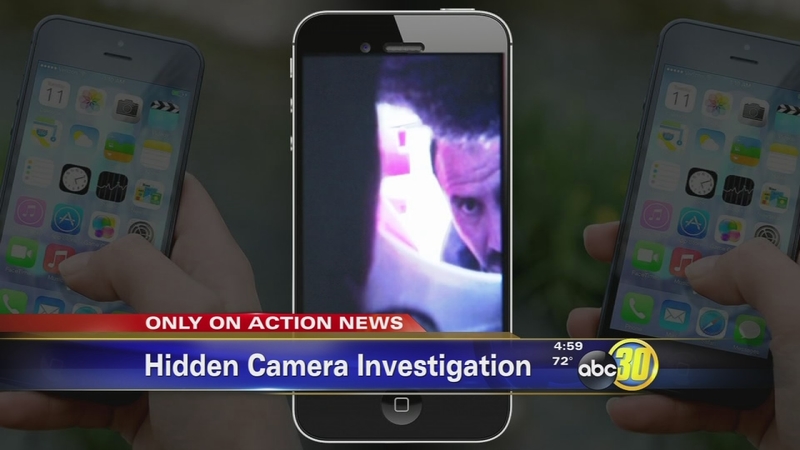 FRESNO, Calif. (KFSN) -- A man caught on his own hidden camera has instilled fear in an Iraq War veteran, worried about what kind of video police might find if they dig deeper.

"That's the shower and he's trying to set it up in our laundry basket," said Denice Lozano as she showed the video to Action News.

Andy Gama, 45, is accused of trying to record his stepdaughter in the shower, but even after she reported it to police, he hasn't been charged with a crime.

Gama is actually a convicted felon and a wanted man with a warrant on a drug charge from a few years ago. The video we acquired could land him in more trouble.

Within the first few frames of the video, its photographer is the center of attention. Andy Gama's face is clear as day and Gama looks just like he does in some of his Facebook pictures. The scene is also clear. It's a bathroom and Gama moves his camera around until the shower is right in frame. Five minutes after he finishes his adjustments, his stepdaughter walks in, removes the trash, and comes back.

"And then I start my shower," Denice Lozano said.

Lozano says it was just by luck that she tossed her dirty clothes right on top of the laundry basket in her bathroom, blocking most of the camera's view. She says a few weeks later, she borrowed her mother's car, found a sim card in the center console, and plugged it into her phone.

"I was shocked, like, I didn't even know how to react," she said. "I was scared to even tell my husband."

Lozano says she reported the video to Selma police, but they told her they couldn't do much since it doesn't show her nude. But when we showed the video to defense attorney Ralph Torres, he said everything is there to make an arrest.

"What I see is misdemeanor crime, just on its face," he said. "I think you have clear intent to invade someone's privacy in a private area."

Lozano is an Army National Guard veteran who served a tour of duty in the Iraq War. She doesn't fear much, but she tells me she is afraid of what else her stepfather might have recorded. Torres says that's exactly why police need to dig deeper.

"Is there more there?" he wondered. "Is this merely the top layer and if we dig further, is there going to be some type of conduct that's more serious?"

An Action News reporter called Gama last week and asked if he could explain the video. He said he didn't have anything to say and then hung up on the reporter. Selma police told us they are investigating and they'll get another look at the video soon.