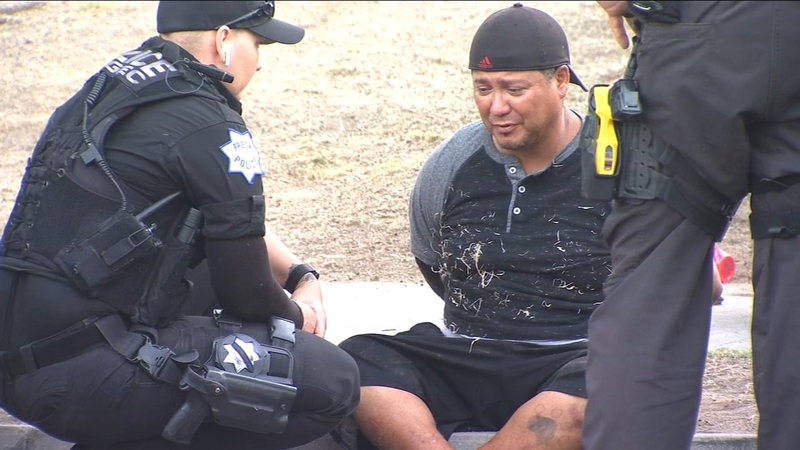 High-speed chase across Fresno in SUV stolen from dealership

FRESNO, Calif. (KFSN) -- A man is in custody after stealing an SUV off a car lot in Northwest Fresno.

Police say it happened around 5 pm Wednesday when employees at a BMW dealership were moving cars and left the keys in the ignition.

About a half an hour later, police received a call about a man who exited an SUV holding a handgun.

Police attempted to pull over the driver, but he took off at speeds of up to 100 miles per hour down McKinley Avenue.

Officers backed off the pursuit for public safety and tracked the car through the air before losing it.

With the help of the dealership's tracking system, officers were eventually able to surround the suspect at a home in Downtown Fresno were he was arrested.
Report a correction or typo
Related topics:
fresnopolice chasehigh speed chasefresno police department
Copyright © 2021 KFSN-TV. All Rights Reserved.
TOP STORIES
Man shot multiple times at party in southwest Fresno
Cyber Monday 2021 deals shopping guide
Fauci says omicron variant will 'inevitably' arrive in US
Valley health officials bracing for arrival of new COVID-19 variant
Fresno police share tips for protecting your packages
Pedestrian hit and killed in Clovis
Is it ever too early to put up a Christmas tree?
Show More
Fresno Co. man accused of stabbing his mother, killing her boyfriend
Fresno State student killed in early morning crash on highway
Boy life-flighted after being shot in Tulare County, deputies say
1 killed, 1 hospitalized after stabbing in Auberry, deputies say
What is omicron? What to know about new COVID variant
More TOP STORIES News