In the last two years, six people have been killed on the stretch of the highway between Elkhorn and Excelsior.
KFSN
By Linda Ha 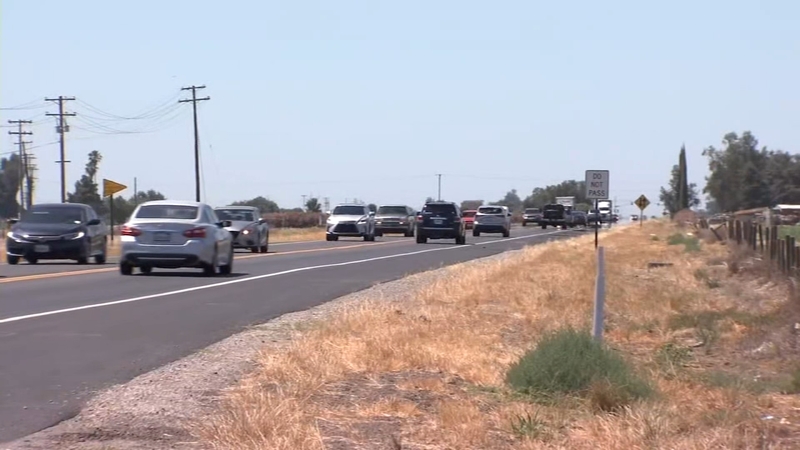 FRESNO COUNTY, Calif. (KFSN) -- A dangerous and deadly stretch of Highway 41 in Fresno County will soon have a concrete median barrier.

It all comes down to safety.

In the last two years, six people have been killed on the stretch of the highway between Elkhorn and Excelsior.

The families of the victims say enough is enough.

That's why beginning Sunday night, concreted barriers are being installed with the hopes of saving lives.

The six-mile stretch has seen hundreds of crashes in recent years, including several fatalities in the last year alone.

Lorna Roush's relative Kenneth Atkins was killed in a head-on crash there last year while on his way to Naval Air Station Lemoore.

Joe Jr. Carillo died after a woman under the influence crossed the center line and struck his car.

As a first step to prevent head-on crashes, there's currently double yellow stripe down the center of the highway and no-passing signs. But that has been unsuccessful.

"People are still passing, we have video of people passing as of yesterday," says Roush.

They want the highway to expand from two lanes to four lanes.

"I know we are going to get this four-lane finished. It's going to take time and our involvement and we're not going away," Roush says.

The proposal to widen the highway comes with an estimated $71 million price tag.

With the current local, state, and federal funding that's either approved or awaiting approval, there's still a $26.5 million funding gap.

Patterson and other lawmakers pushing for the expansion are still optimistic.

"Anybody who drives from Fresno to the coast knows what it's like to drive on the 41. It's a good highway when it's two lanes north and two lanes south, but in that six-mile strip when it condenses down to just the one lane one way and one lane the other, that's when the accidents occur," says Roush.

Beginning tonight through Friday, August 6th, Caltrans and construction crews will be conducting one-way traffic control to install the K-rail, a barrier, between 7 pm and 6 am.

"It means the world," says Roush.

Caltrans is asking drivers to be patient and be prepared for a longer commute during the installation.