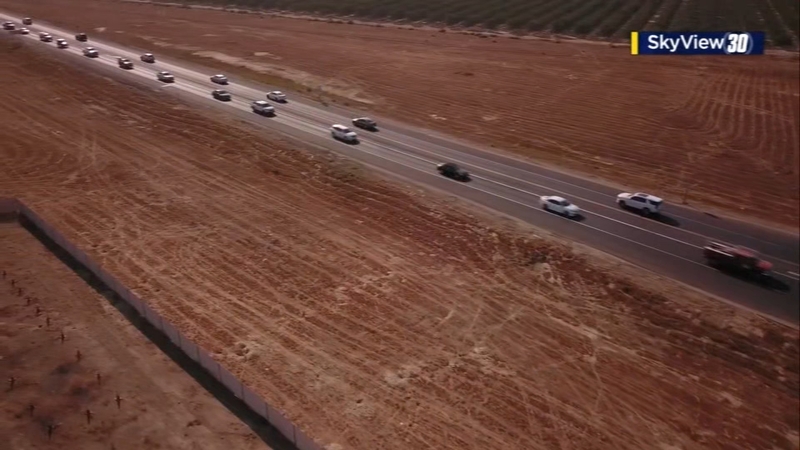 "We had just celebrated our five-year anniversary. Honestly, we were like two teenagers in love. We had that true love story," she says.

But their love story was shattered on a Wednesday morning last month as Kenneth Atkins was on his way to work.

"It was about 6:10 in the morning, still dark out. But he was following all the rules that you need to wearing a seatbelt, keeping his distance," she says.

But none of that mattered when California Highway Patrol officers say a driver who was attempting to pass several cars struck Atkins head-on. The impact caused his compact car to flip into a field. When it came to rest he was dead.

After 9/11 Kenneth joined the Navy and served for twelve years.

He worked for the Department of Defense and at the time of his death, he was contracted on a large project in Lemoore.

His coworkers honored him recently with a piece of structural steel bearing his name.

His service and selflessness is what's helping Misty work through the heartbreak. She is also working to change the two-lane highway where Kenneth died. There's a 6.2-mile stretch where a four-lane becomes two.

On Thursday, Misty teamed up with the California Highway Patrol to talk with the newest employees on the naval base about traffic safety.

Misty's cousin is also working with local leaders and Caltrans officials to change the section where Kenneth died.

"There have been multiple accidents- two to three times a week, many many fatalities, and when Ken lost his life something just clicked. It was time. It's time for the people to step up and hold Caltrans accountable," says Misty's cousin Lorna Roush.

The two have started a Facebook page to widen Highway 41 and already more than a thousand people have joined, many sharing stories about crashes they or their family members have been involved in there.

Even if the road cannot be widened immediately, Misty hopes action is taken immediately to put a concrete divider in and in the future through a widening project.

"I'm just hoping the state can come through and fix it for him because that's the least I can do, I can't get him back. So I'm hoping this is in his honor," says Misty.
Report a correction or typo
Related topics:
fresnocaltransfatal crashroad safety
Copyright © 2022 KFSN-TV. All Rights Reserved.
FATAL CRASH
1 killed, 3 injured in crash on Highway 41 in Fresno County
1 killed in head-on crash in west Fresno
1 killed in crash in Madera, Yosemite Ave closed for investigation
Authorities identify 74-year-old man killed in Fresno County crash
TOP STORIES
Le Grand woman charged with 3 counts of murder for deaths of children
Man shot and killed in central Fresno, police say
4 families displaced after apartment fire in NE Fresno
New details emerge in killing of mother and grandfather in SE Fresno
DA to pursue death penalty against 3 accused in Fresno mass shooting
2 NYPD officers shot, 1 fatally, responding to domestic violence call
Health officials credit vaccine for low COVID rates at nursing homes
Show More
Ag leaders working to protect Valley farmworkers during Omicron surge
1 killed, 3 injured in crash on Highway 41 in Fresno County
UC Merced to bring back students in stages for in-person learning
CA proposal would let older kids get vaccines without parents' consent
144th Fighter Wing gets glimpse into future with 'robot dog'
More TOP STORIES News