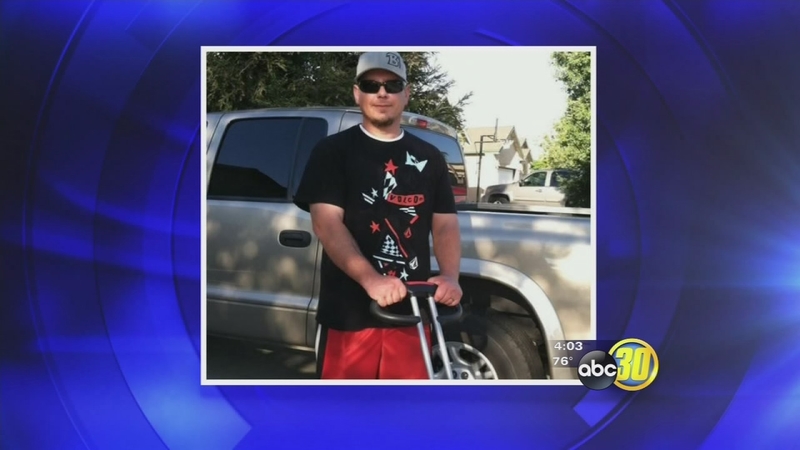 FRESNO, Calif. (KFSN) -- Police are looking for the driver in a deadly hit-and-run east of Kingsburg. The California Highway Patrol identified the victim as 36-year-old Nathan Bolton of Kingsburg.

They said Bolton was not wearing a helmet, but did have proper lighting equipment on his bike.

The incident happened on Avenue 400 and Road 24 outside of Kingsburg, and residents say people like to pass and drive fast in this area. But when one white Dodge pickup truck left Kingsburg city limits headed east early Tuesday morning, a witness told police it was driving erratically.

"We have an individual who had been behind the vehicle and knows that the vehicle had been swerving, and just prior to the accident, it had crossed over the line and drifted back over at which time he struck the bicyclist," said Scott Crewse, CHP.

The driver took off, and Bolton died at the scene. Bolton was on his way to work at Kings River Golf and Country Club.

"We had heard the ambulance go by and a little later we had heard that somebody had been hit on a bike, and of course you put two and two together and gotta wonder if it's the same guy. And of course I drove out there, and it was," said Mike Kroeze, Bolton's boss.

Bolton worked in maintenance, and Kroeze was his supervisor. He said Bolton mainly mowed the grass and could handle any piece of equipment and could always be relied on to get the job done.

The last time Kroeze talked to Bolton was when he gave him a ride home from work on Monday.

They've talked about the dangers of biking on Avenue 400 before, but Kroeze understood that it was his way to get to work.

What he didn't know is that Bolton wouldn't show up to work the next day. And what he doesn't understand, is how the driver could leave the scene.

Bolton's family said that he was greatly loved and will be missed.