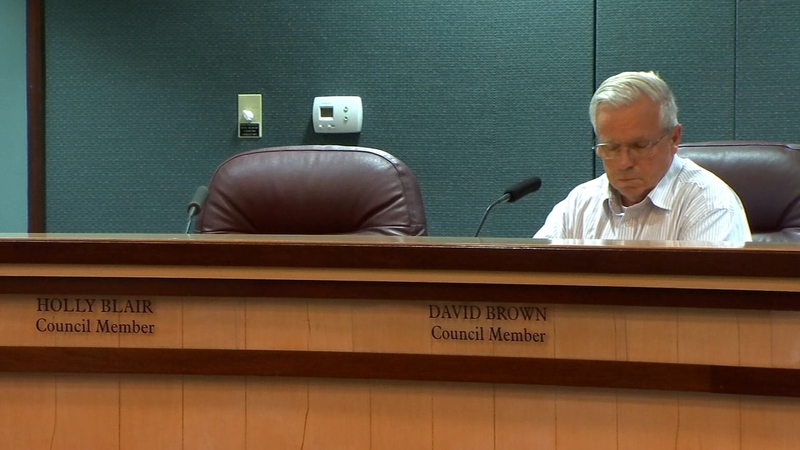 LEMOORE, Calif. (KFSN) -- It was Councilmember Holly Blair's fifth and final chance to keep her position in the Lemoore city council yet her seat remained empty again during Tuesday night's meeting.

This was her last strike, and city officials are now looking for her replacement.

In resounding agreement, the council decided to move forward in vacating Blair's seat.

This comes after a long series of battles and legal issues between Blair and Lemoore City officials.

"I think she's been in a troublesome position since she's been on. She has some problems. She needs help. Like I said in my comments, I hope she gets the help she needs," said Lemoore resident Tom Reed.

Blair is currently behind bars at the King's County Jail on domestic abuse charges for allegedly hitting her husband in their home a few weeks ago.

Before that, she was arrested in June for assault and child endangerment charges after driving into the Lemoore Police parking lot, and leading officers on a chase.

City policy reads that if a council member misses five meetings without good cause, their seat is vacated.

However, legal analysts say she can use her incarceration as defense.

"I don't think they can remove her for a good cause, because she's in jail. She can't get out. She's not willfully not attending the meeting," said legal analyst Tony Capozzi.

"I would argue its not good cause because the behavior put her in that situation, not an accident," said Lemoore city manager Nathan Olson.

Along with Blair's vacancy, city officials will also need to fill Chad Billingsley's seat after he announced his resignation.

They're not wasting any time and plan to start taking application as early as Wednesday.

"We want what's best for the city and best candidate to get appointed," said Olson.

Folks like Reed had some positive things to share about Blair, and hope the next councilmember in her seat will bring some of those same qualities to the table.

"Certainly we would not want someone that's disruptive, but she does bring good points and does her homework. She is aware of what is on discussion," said Reed.

As they start their search, Olson says they hope to have both vacancies filled by August 6th.