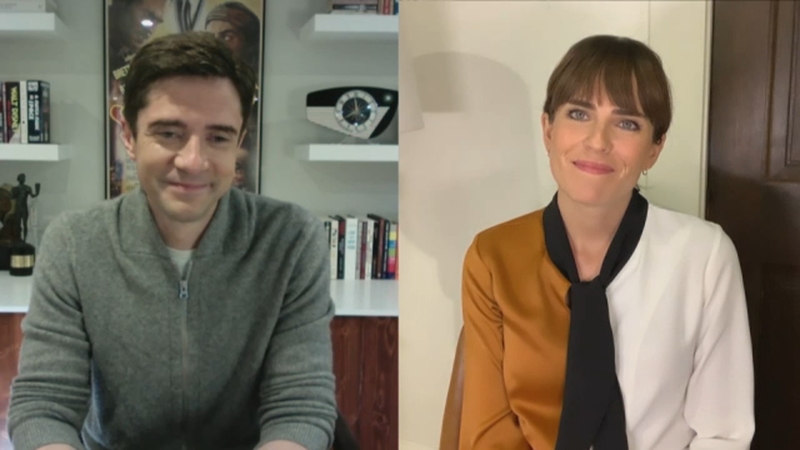 NEW YORK -- Money can create uncomfortable moments and conversations and that proves to be true for the Hayworth family on ABC's new comedy "Home Economics."

The series takes a look at the relationship among three adult siblings: Connor who is in the one in the 1%, Tom who is in the middle class, and Sarah who is barely holding on.

The show is inspired by the life of writer and executive producer Michael Colton.

"This is something that Mike is really going through," said Topher Grace, "Tom." "At the time he was unemployed so he was middle class, and his sister was struggling. They all live in a close area, in close proximity to each other. My hope is that the show becomes such a success that Mike becomes the rich one!"

Karla Souza, who you may remember from ABC's "How to Get Away with Murder," plays "Tom's" wife "Marina." She said she was drawn to the role because it shows the real parts of being a mom.

Being that it is a comedy, Grace finds himself having to take on some physical comedy, something he's not entirely used to doing.

"There's a lot of it for me. I was kind of in pain by the end of the season. It shows how old I am, I'm the oldest sibling. Two or three episodes in there's a bounce house scene, and what you don't realize when you are reading it on the page is that you have to do it 5,000 times to get it from lots of different angles, lots of different takes, so I might be in better shape because of this season," Grace said.

Get to know the Hayworth family when #HomeEconomics premieres Wednesday at 8:30|7:30c! pic.twitter.com/b1FPCeehrD

Don't miss the big premiere of "Home Economics" this Wednesday, April 7 at 8:30 p.m EST on ABC!