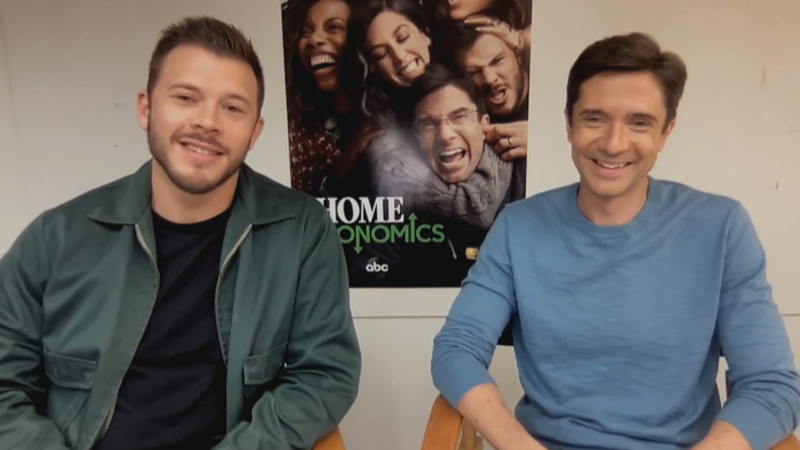 NEW YORK -- The Hayworth siblings are back for season 2 of "Home Economics" on ABC.

Topher Grace ("Tom") and Jimmy Tatro ("Connor") took some time out to talk about what's new this season.

"It was something that started during the pandemic, and we were very lucky just to do the short season with seven episodes and we're even luckier that it caught on and people loved it, so now we're able to do it bigger and better," Grace said.

The season kicks off with a big football episode where the siblings go to a 49ers game. That includes some big guest stars like Hall of Fame wide receiver and three-time Super Bowl champion Jerry Rice and eight-week Billboard chart-topper 24kGoldn.

"He had a mask on that said 'GOAT' and yeah, you are," Tatro said. "But it was fun to do a football episode where we're out on the field and it was just exciting."

Psyched for the #HomeEconomics premiere with NFL Hall of Famer @JerryRice 🏈 Wednesday at 9:30/8:30c on ABC! pic.twitter.com/mGSAo3GeNJ

Tom's continuing to write his book, but at some point soon, the book will come out and so will the fallout.

"The long-term plan is for the book to come out and maybe change the different stations in society that these families are at," Grace said.

Both say that working with the many kids on the show has been an absolute pleasure.

"They have a nice little kid group going that sometimes I'm a little jealous of," Tatro said.

Don't miss the season 2 premiere of "Home Economics" this Wednesday, September 22 at 9:30 p.m. EDT on ABC. Episodes can also be viewed the next day on demand and on Hulu.

Sibling rivalry comes with a price 💸 Tune in to the #HomeEconomics premiere Wednesday at 9:30/8:30c on ABC! pic.twitter.com/1Dm8qGvzsF