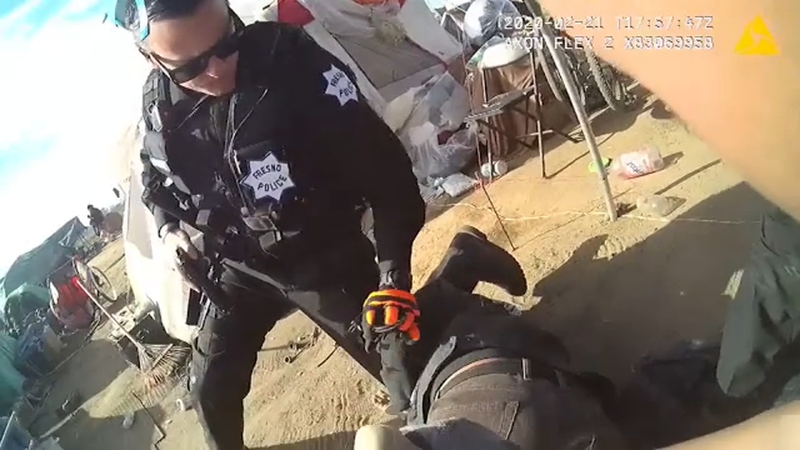 FRESNO, Calif. (KFSN) -- The altercation was caught on body camera.

A 60-year-old homeless man in Fresno was facing charges for resisting arrest after attorneys claim police officers told him to remove his belongings from a homeless camp early last year.

This week, a jury found that man, Lewis Brown, not guilty of the charge after a four-day trial.

"They used every maneuver on him even though he wasn't being aggressive," says attorney Kevin Little.

Little says the officers told his client and others at the homeless camp near Highway 180 and 99 that they had 10 minutes to remove their belongings, and Brown asked them if they had that right.

Shortly after, more officers return and Little says that's when they pinned down his client.

"One of them had a knee on Mr. Brown's head," Little said. "That same officer took out his firearm. You can see the firearm is pointed down at Mr. Brown."

Little says current law doesn't allow jurisdictions with more transients than shelters, like Fresno, to move the homeless from place to place.

He says more funding needs to be put in to provide services and housing.

Mayor Jerry Dyer can't comment on the case, but says they're creating more shelter by converting more motels into housing.

"We're in the process of opening more motels," Dyer said. "One in the latter of July, and another in August. With that, we'll have more room capacity."

Dyer says they're also creating a homeless assistance response team that will bring services and help directly to those who need it.

Action News reached out to the Fresno Police Department for comment, which released a statement saying, "A government tort claim has been filed with the city on this matter and because of that, it would be inappropriate for us to comment further at this time."
Report a correction or typo
Related topics:
fresnohomelesscourt case
Copyright © 2021 KFSN-TV. All Rights Reserved.
TOP STORIES
Valley reaches low supply of platelet cells, some treatments paused
Man shot and killed in Tranquillity, homicide investigation launched
Fresno developer files lawsuit against city, councilmember
New evacuation orders in place in Tulare County due to Windy Fire
Experts urging caution amid poor air quality in Central CA
KNP Complex Fire: More evacuation warnings issued in Tulare Co.
FDA backs Pfizer COVID-19 boosters for seniors, high-risk
Show More
No prison time for attack on Armenian protesters
Scott Peterson to be re-sentenced to life this fall, judge says
Despite CA's lower COVID case rate, Valley has high transmission
Suspects to stand trial in 1996 Kristin Smart disappearance
Police: Man shoots estranged wife to death in Clovis, injures 1
More TOP STORIES News