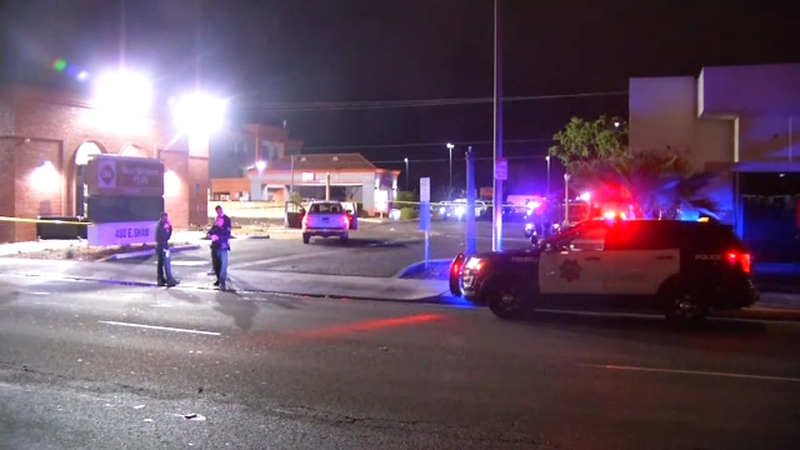 FRESNO, Calif. (KFSN) -- Remnants of crime scene tape are left behind at this vacant building on Shaw and Fresno Avenue after a homeless man was shot and killed here Saturday night.

Authorities have identified him as 35-year-old Joseph Gutierrez.

On Monday, Fresno Police Chief Paco Balderama said his office is still investigating, but they do have good surveillance footage from nearby cameras.

"It does appear that the incident did occur when the homeless individual went after the security guard, and he ended up using his firearm," he said.

Investigators say the security guard was doing a routine check of the property when he saw Gutierrez and questioned him.

As things escalated, a physical fight broke out between the two and that's when the security guard fired his weapon.

Reese Smith, 33, was in the parking lot at the time of the shooting and was hit in the arm by a stray bullet. He ran into the nearby Best Western for help.

"I remember my arm caught fire and it just got super hot, and I remember hearing gun shots but I didn't know where they were coming from," he said.

Smith's attorney says they will file a lawsuit against the security company that employed the guard.

"From a legal perspective, there's no indication that the security guard had justifiable or sufficient reasons to discharge his weapon," says Butch Wagner.

Mike Spicer is a Security and Investigations Consultant who also had a 30-year law enforcement career with the California Highway Patrol.

He says in order to be a guard, it takes 32 hours of training.

"I always train the officers to say you're not a cop; you observe, report," Spicer said. "Get the police involved. When you got trouble, don't handle it yourself if you're going to be overwhelmed and have to use that weapon. You want to avoid using that weapon at all cost."

Action News reached out to the security company, but they did not want to comment.

Chief Balderama says they are still working to find out of this was a justifiable homicide or not.
Report a correction or typo
Related topics:
fresnohomelesshomicide
Copyright © 2021 KFSN-TV. All Rights Reserved.
More Videos
From CNN Newsource affiliates
TOP STORIES