Homes getting 'tea-p'd' helps save small business during coronavirus pandemic 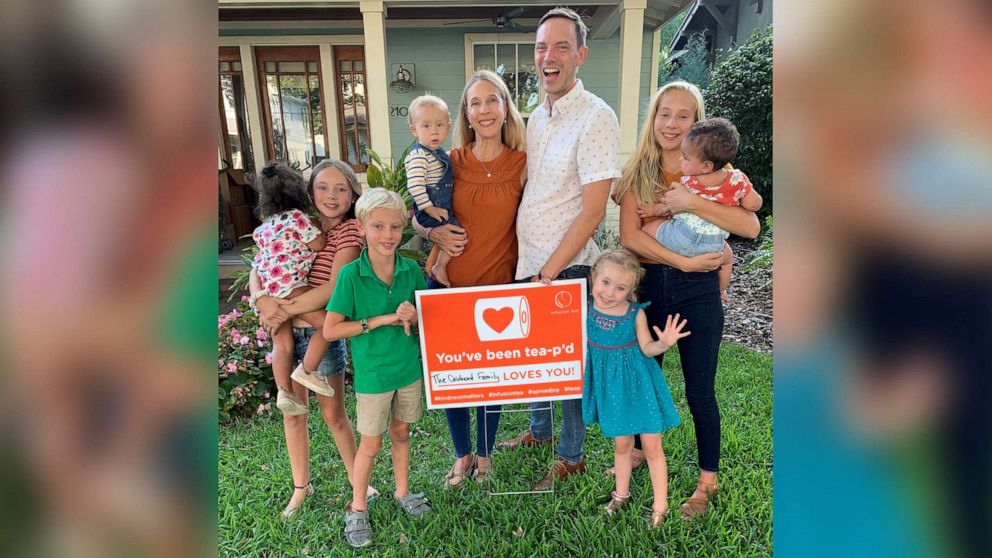 Among the small businesses across the country that have had to get creative in order to stay afloat during the coronavirus pandemic is a family-owned tea company in Florida.

In Orlando, where the company, Infusion Tea, is based, more than 1,000 homes have been "tea-p'd" over the past month.

The "tea-p'ing" is the brainchild of Christina and Brad Cowherd, who founded Infusion Tea, a vegetarian restaurant and tea business, in 2004.

"Christina really wanted to start a little thing here in our neighborhood where we were spreading joy to people," Brad Cowherd told "Good Morning America." We thought how can we brighten people's days? Everybody needed toilet paper and we have so much in the restaurant, we thought let's go give it out."

Cowherd and his wife, the parents of seven children, started out by having a few dozen yard signs made that said "You've been tea-p'd" and included a space to write in the giver's name before the words "loves you." They attached two rolls of toilet paper and a bag of loose-leaf tea to the sign and placed them in front yards of some of their long-time customers.

"It says on the sign that you can pass it on and has our website," said Cowherd. "The day after we did our first load, something like 65 people ordered signs. It was crazy."

Nearly one month later, Infusion Tea has delivered around 1,500 signs in the Orlando area, according to Cowherd.

The effort proved so popular that the business began offering packages featuring a sign, two rolls of toilet paper and tea that can be shipped anywhere in the U.S. They have now sold more than 1,200 of those packages, including sending one to every state, according to Cowherd.

"It's been our COVID miracle," he said. "This really didn't start as an idea to save our business. We thought we would do 30 or 50 signs in the neighborhood as a nice gesture and they took off."

Cowherd said the company's gross sales fell from around $3,500 a day to just $500 a day when restaurants were ordered closed in Florida in March. The success of the "tea-p'd" initiative has allowed Cowherd and his wife to rehire their employees and give them close to the same number of hours per week they were working pre-coronavirus.

The initiative is also helping local vendors, like the Orlando sign maker the Cowherds hired to make their yard signs.

"We keep reordering and he's like, 'I don't know what you're doing with these but this is insane. Thank you for keeping me in business,'" said Cowherd. "So it trickles down."

The Cowherds have also made the effort a family affair, bringing their school-age kids in to help with packing and preparing the signs while they are doing virtual learning due to schools being closed.

"School has been impossible with seven kids in the house," said Cowherds, whose children range in age from 10 months old to 14 years old. "We feel like the lessons they're learning in attitude and being in the business and helping are important so we're relying a little bit on real-life skills right now."

Cowherd, whose business also received a PPP loan from the federal government, said he gets at least one call per day from a recipient of a tea-p'd sign who is in tears expressing their appreciation for the gesture.

"It sounds silly to think that some toilet paper and a bag of tea could do that but I really think it's the message of someone loves you," said Cowherd. "In this time, to get something that says so-and-so loves you, people are really into it."

"We went through 2007 and 2008 [the financial crisis] and that taught me not to be fearful, just to go into it eyes wide open and your business will tell you what it is that it needs, and in this case, our business told us that everyone needed toilet paper and a way to feel joy in this," he added.
Report a correction or typo
Related topics:
abc newsnational
Copyright © 2020 ABC News Internet Ventures.
More Videos
From CNN Newsource affiliates
TOP STORIES