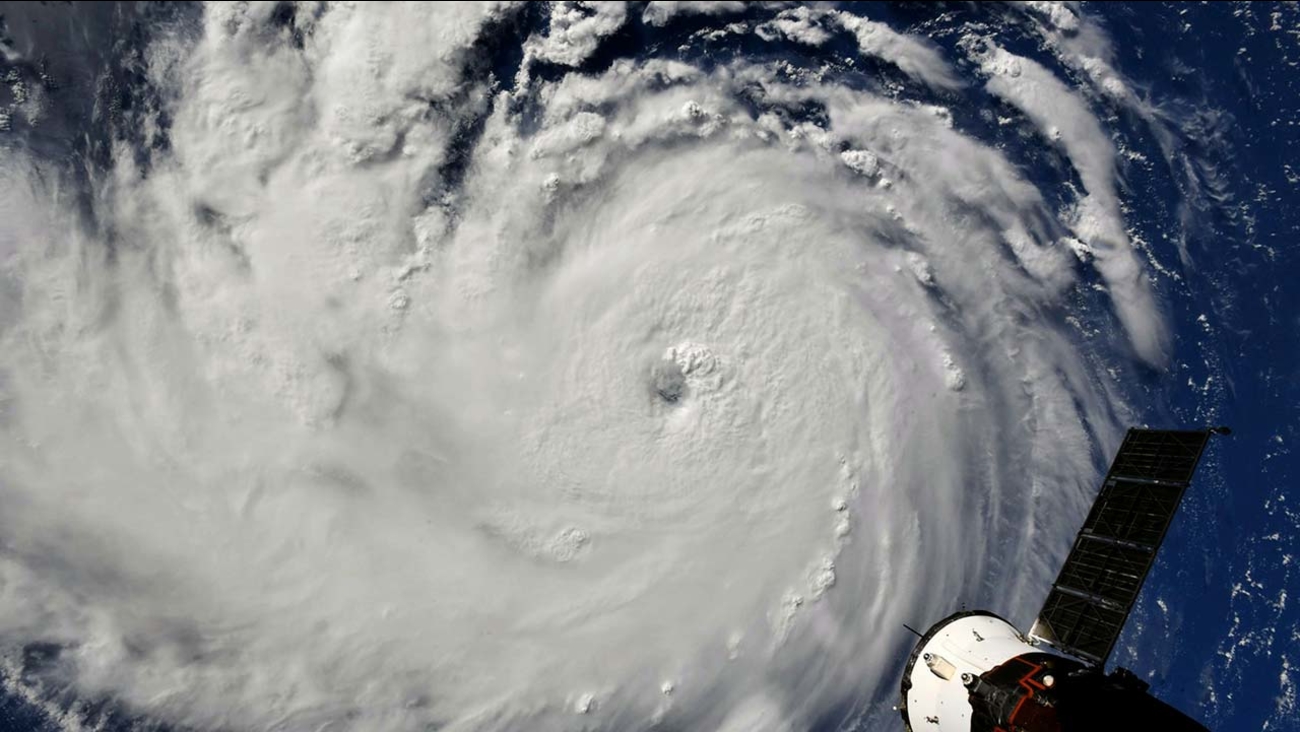 RALEIGH, N.C. -- Florence rapidly strengthened into a potentially catastrophic Category 4 hurricane on Monday as it closed in on North and South Carolina, carrying winds and water that could wreak havoc over a wide stretch of the eastern United States later this week.

The first effects were already being seen on barrier islands Monday as dangerous rip currents and seawater flowed over the state highway. People were told to prepare to evacuate communities up and down a stretch of coastline already identified as particularly vulnerable to rising sea levels due to climate change.

For many, the challenge could be finding a safe refuge: If Florence slows to a crawl just off the coast, it could carry torrential rains up into the Appalachian mountains, causing flash floods, mudslides and other dangerous weather across a wide area.

A warm ocean is the fuel that powers hurricanes, and Florence will be moving over waters where temperatures are peaking near 85 degrees (30 Celsius), Blake wrote. And with little wind shear to pull the storm apart, Florence's hurricane wind field was expected to expand over the coming days, increasing its storm surge and inland wind threats, and raising the likelihood of life-threatening freshwater flooding.

"The bottom line is that there is increasing confidence that Florence will be a large and extremely dangerous hurricane, regardless of its exact intensity," Blake said.

By noon EDT on Monday, Florence had top sustained winds of 130 mph (195 kph). It was centered about 1,230 miles (1,985 kilometers) east-southeast of Cape Fear, North Carolina, and moving west at 13 mph (20 kph). Its center will move between Bermuda and the Bahamas Tuesday and Wednesday, and approach the coast of South Carolina or North Carolina on Thursday, the National Hurricane Center said.

Hurricanes Isaac, which could hit Caribbean islands, and Helene, much farther out to sea, lined up behind Florence as the 2018 Atlantic season reached its peak.

Preparations intensified up and down the densely populated coast.

On North Carolina's Outer Banks, Dawn Farrow Taylor, 50, was gathering photos and important documents and filling prescriptions Monday before heading inland. She grew up on the shore, and says this will be only the second time she's evacuated.

Since reliable record-keeping began more than 150 years ago, North Carolina has only been hit by one Category 4 hurricane: Hazel, with 130 mph winds in 1954.

"I don't think many of us have ever been through a Category 4. And out here we're so fragile. We're just a strip of land -- we're a barrier island. ... Already we're getting some overwash, the ocean is coming over 12," she said, referring to the islands' main road.

The governors of North and South Carolina and Virginia declared states of emergency far ahead of the approaching storm. South Carolina Gov. Henry McMaster also suspended his campaign and asked President Donald Trump for a federal emergency declaration.

Navy ships off Virginia's coast were preparing to sail out of the path, a North Carolina university has already canceled classes and people have begun stocking up on plywood, bottled water and other supplies.

Red flags have already been flying on beaches, warning swimmers to stay out of the water as seas began kicking up. People rushed to get emergency kits ready, map out escape routes, fill sandbags and secure their homes.

"Pretend, assume, presume that a major hurricane is going to hit right smack dab in the middle of South Carolina and is going to go way inshore," South Carolina Gov. Henry McMaster said. The state's emergency management agency said it is "preparing for the possibility of a large-scale disaster."

In coastal Charleston, South Carolina, city officials offered sandbags to residents. Myrtle Beach Mayor Brenda Bethune urged people to secure their homes but said it was too early to know if evacuations will be ordered.

"Literally, they are filling buggies full of water, shopping carts full of water," Ryan Deeck, grocery department manager at a Walmart, told The Sun News. "They're coming in and buying water and plates, and that's about all they're buying."

North Carolina crews were getting bulldozers and chain saws ready.

In Jacksonville, North Carolina, about 20 miles (32 kilometers) inland, some residents picked up hurricane supplies during their normal weekend shopping, The Daily News reported. Ilija Cesal told the newspaper he wouldn't worry about buying extra water or other supplies for a few more days.

"I'll see by Wednesday how that goes - we got over 48 hours before that happens," Cesal said.

The University of North Carolina at Wilmington, near the shore, canceled its upcoming alumni weekend and all classes starting at noon Monday, encouraging its students to leave campus for a safer location.

In southeast Virginia, Naval Station Norfolk told not to leave their vehicles at the sprawling base later this week because of the flood threat. The Navy planned to send ships from the Hampton Roads area of Virginia out to sea.

Florida-based Carnival Cruise Line was re-routing its cruise ships, but there were other hurricanes to contend with.

Lining up behind Florence, Isaac was about 1,150 miles (1,855 kilometers) east of the Windward Islands with top winds of 75 mph (120 kph) early Monday, moving west at 14 mph (22 kph). Isaac's forward movement was accelerating on a path to cross into the lower Caribbean on Thursday.