The lawsuit says in the week before the school brought kids back on campus, the county warned the school not to open in a series of emails.
KFSN
By Corin Hoggard 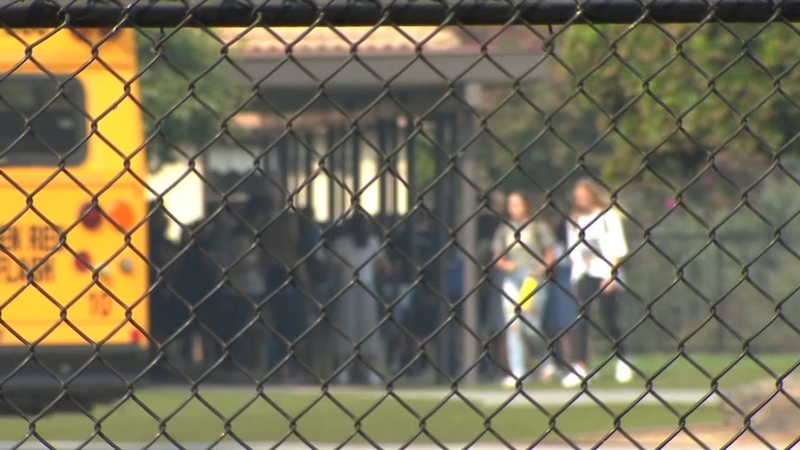 FRESNO, Calif. (KFSN) -- Fresno County filed for an injunction to close Immanuel Schools Thursday evening, a week after the private school in Reedley opened for in-person instruction in violation of state and county emergency orders.

"The CDC and medical experts attest that they are creating new public health problems for our children by not allowing them on campus for learning," they said.

BREAKING: Fresno County has filed an injunction to close Immanuel Schools, eight days after the private school in Reedley brought kids on campus in violation of state and county emergency orders.

More to come from @abc30... pic.twitter.com/TDX0KfYEEK

Scientists agree this is true, but the CDC's first consideration for school administrators is the COVID-19 transmission rates in the immediate community and in the communities in which students, teachers, and staff live.

"If there is substantial, uncontrolled transmission, schools should work closely with local health officials to make decisions on whether to maintain school operations," the CDC's guidance says.

Trustees added that they believe the orders are unconstitutional, so they're "working with legal counsel and other Christ-centered and private schools to file a lawsuit to address these orders."

The U.S. Supreme Court has repeatedly ruled coronavirus emergency orders are legal, even when they restrict religious activity.

The county health officer issued an order for the schools to close and the county says it delivered the order personally to Immanuel CEO Ryan Wood.

RELATED: Simmering schools dispute not boiling over in Fresno County

Immanuel has continued to violate the orders.

"These conditions present an immediate and serious threat to the health and safety of the students, parents, teachers and staff at Immanuel Schools," the county's complaint says.

Fresno County has been on the state's monitoring list since June 8 because of large numbers of new cases averaging more than 300 per day. The county's ICU bed capacity has hovered below 10% and hospitals have been in surge protocols with as many as 376 COVID-19 patients taking up hospital beds and no fewer than 260 since July 14.

The complaint points out the city of Reedley has had 1091 confirmed coronavirus cases to date. That represents about 4.4% of the city's total population and 2.4% of the population is currently infected, according to the county's coronavirus website.

RELATED: Fresno County orders Immanuel Schools to shut down after it brings kids back to campus

We reached out to Immanuel administrators for a response Friday morning, but have not heard back. Their board of trustees previously said they would not be discussing their opening with the media.

The county's lawsuit asks for a restraining order and a permanent injunction to shutter the schools and legal costs for the county. The school also faces $1,000 fines for each day they open for in-person instruction.

A few hundred kids and adult staffers come onto campus every day at Immanuel Schools and every day they risk thousands of people's health, according to Fresno County officials.

County administrative officer Jean Rousseau says they can't let the school jeopardize community efforts to slow the spread of coronavirus, so a week after issuing a health officer order to close Immanuel, they filed for an injunction.

"We certainly hope that Immanuel Schools comes to their senses and shuts their school down," Rousseau said.

The county's complaint details the warnings they gave school administrators and the reasons for prohibiting all schools holding classes in person, including overwhelmed hospitals and widespread infections in Reedley - 1,138 cases as of Friday in a town of about 25,000.

"I'm always worried whenever we have congregate settings because I know that's where these outbreaks occur and I know that wherever outbreaks occur you have the risk of increased hospitalizations and deaths," said interim health officer, Dr. Rais Vohra.

Legal analyst Tony Capozzi says administrators will have one last chance to make a case for staying open when they go to court, even though he says they're clearly violating an order he believes is constitutional.

"The school's position is 'You can't order us to do that and we're meeting all the precautions we need to meet to show that this isn't a problem, nobody's health is going to be in jeopardy,'" Capozzi said.