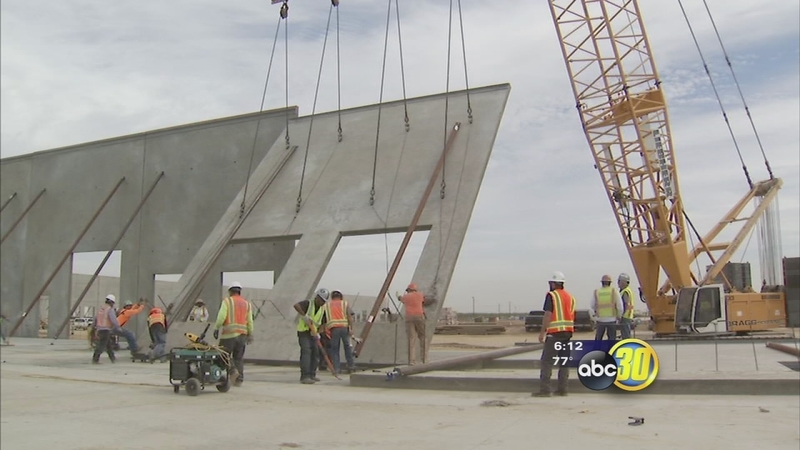 Crews are carefully but quickly moving to increase industrial space for companies looking to either expand or move into the valley.

Construction workers get into a certain rhythm when it's time to tilt up a 90,000 pound wall. The "tilt-up" process of moving concrete walls into place happens at a brisk pace which is why the work on industrial warehouses are getting done in relatively quick fashion.
"What's so nice is we can lift 30-40 panels a day. So what happens is you drive by one day and don't see anything. You drive by a couple of days later and all of a sudden there's an instant building there," said Ray Nitti a Nitti Graycor general manager.

Half a million square feet will be spread out over three buildings at this project. That's enough to fit 12 football fields.

Buddy Mendes, Fresno County Supervisor explains, "It's not build them they come. You build them because they're coming and that's a big difference."

Mendes was encouraged to see local crews working on the project.

"We've had a seven year lull. We haven't built basically all through the recession we did not build," stated Brelsford. He also said existing tenants at some of his other facilities will have first crack at the new buildings but he believes other manufacturing companies will also be interested in moving into the development.

"We feel there should be a great demand. We should hit market perfectly on this structure," stated Brelsford.

The new buildings should be finished in December.

Brelsford figures space in the building will be snapped up quickly because similar facilities are difficult to find in the Valley.