'It's horrifying': Civilians tell of fear, uncertainty in Israel-Hamas conflict 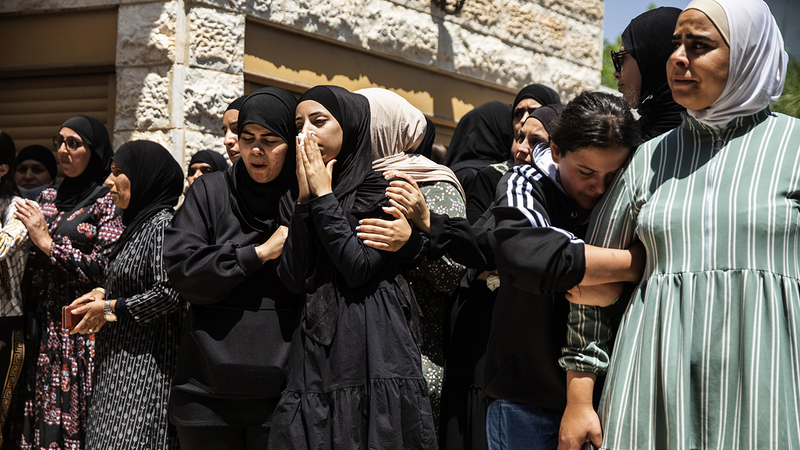 GAZA CITY -- Even the moments of quiet in Gaza City come with their own psychological toll.

"They're so precious," Najla, who did not provide her surname for safety reasons, a Palestinian humanitarian worker in the city, told ABC News. "But at the same time, they're so frightening because ... preparing yourself for the next attack is as horrible psychologically as it is experiencing it in itself. Every minute there are continuous airstrikes and explosions all across the Gaza Strip and several of them were close by."

Tensions over the prospective eviction of six Palestinian families in East Jerusalem dramatically escalated last weekend, with clashes between police and protesters at al-Aqsa mosque, the third holiest site in Islam. This prompted a rocket assault from Hamas into Israel on Monday. In turn, Israel responded with airstrikes of its own, and the two sides have continued to trade assaults since.

Hamas has fired more than 1,600 rockets into Israel this week at both civilian and military targets, the Israeli military has said, killing 10 and injuring 636.

An Israeli airstrike destroyed a high-rise building in Gaza City that housed offices of The Associated Press and other media outlets on Saturday.

Kinneret Edelman, an Israeli English teacher and mother of two children from the border settlement of G'ea, a target for many rocket attacks, said she left her home for the north of the country on Thursday. Most of the explosions she heard were rockets intercepted by the Iron Dome, Israel's rocket defense system, though one rocket fell near her parents' home in G'ea after she left, she said.

"I started seeing the trauma [in my sons], so I realized this wasn't about me, we had to leave," she told ABC News. "You find yourself sitting there with two kids, waiting for the next alarm. They can't go outside, they can't meet friends, they can't jump on the trampoline outside, because my calculation says that they don't have enough time to get in -- 20 seconds, that's not enough."

In Gaza, residents say there is nowhere to run.

"We're not allowed to leave," Najla said. "We are locked in. Very few people who are granted permits to leave through Israel."

The Israeli strikes and shelling in Gaza, which the military says are aimed at Hamas targets, have killed 139 people, including 39 children as of Saturday, according to the Palestinian Health Ministry. At least 1,000 have been injured.

Gaza is described by many human rights groups as an effective "open-air prison."

"Gaza is one of the most [densely] populated areas in the world. It is unavoidable to have to have civilian casualties when there is shelling or airstrikes," Suhair Zakkout, a spokesperson for the International Committee of the Red Cross in Gaza, told ABC News.

According to the IDF and UN reports, Hamas regularly uses apartment buildings as bases of their operations, positioning themselves near civilians for cover. As part of the Israeli assault, whole buildings have been destroyed in devastating airstrikes. On Saturday, the building housing media outlets such as The Associated Press and Al-Jazeera in Gaza was destroyed in an airstrike, with journalists in the building given roughly an hour to evacuate. The Israeli Air Force said the building housed Hamas military assets.

The Associated Press said it was "horrified" by the attack and only just managed to evacuate its journalists in time. "The world will know less about what is happening in Gaza because of what happened today," it said in a statement.

Al Jazeera also put out a statement saying it "condemns in the strongest terms bombing and destruction of its offices by the Israeli military in Gaza, and views this as a clear act to stop [journalists] from conducting their sacred duty to inform the world and report events on the ground."

Following the strike, White House press secretary Jen Psaki tweeted that the U.S. has "communicated directly to the Israelis that ensuring the safety and security of journalists and independent media is a paramount responsibility."

Earlier on Saturday, an Israeli strike at a refugee camp in Gaza City killed eight children and two women from the same extended family, in the single deadliest incident of the conflict so far, according to the Palestinian Health Ministry. The father, Mohammed Hadidi, was seen consoling his 5-month-old son, the only other survivor from his immediate family.

In any conflict, it is civilians that pay the highest price. Describing the recent rocket attacks from Gaza in Tel Aviv, resident Giordana Grego said that after hearing the initial siren, her family has around 90 seconds to make it to a bomb shelter, some of which are built into homes. The closer that people live to the border, like Kinneret, they have even less time to react.

"I'm concerned," Grego told ABC News. "But there are so many variables that are so unpredictable and so out of control that I'd better not think about them."

"You wonder when you're in the shelter, you don't really know if the rockets have been intercepted by the 'Iron Domes' or if they actually have fallen somewhere close to you," she said.

Around 90% of Hamas' rockets have been intercepted by Israel's 'Iron Dome' defense system, which intercepts missiles, according to the IDF. However, those that do get through have caused damage to residential areas and loss of life.

In Gaza, there is no such warning system. Instead, the Israeli military warns ahead of its strikes on large residential buildings by calling ahead and telling civilians to evacuate, or firing preliminary warnings via drones ahead of the full strike in a move dubbed "roof knocking." Usually, residents have time to evacuate their homes, the IDF says, but in crowded Gaza, there is little room to maneuver.

Tensions rise in the Middle East as Palestinians on Saturday were marking Nakba (Catastrophe) Day, when they commemorate the estimated 700,000 people who were expelled from or fled their homes in what was now Israel during the 1948 war.

Israel imposed a blockade of the strip after Hamas, who oppose the existence of Israel, seized control of the strip in a bloody coup in 2007.

"The people when they rush to the street, when they find that the street is safer than their own homes, this is the tragedy they are living," Zakkout said. "There is no shelters in Gaza. So people either, they are accommodated in their extended families' homes or they go to places like the [NGO] Palestine Red Crescent to take refuge for a couple of hours till the morning comes. And then they can find their own ways."

Under blockade by Israel and Egypt, life in Gaza has always been difficult, Najla said. And with two young children, she said she faces the dilemma of how to explain the ongoing crisis as a parent.

"What story can I tell my children?" she said. "What can I say when she sees that a school was shattered? What can I say when the road was broken completely? In many familiar places that we always all the time go to, they're just huge holes. It's hard, it's horrifying."

Several airstrikes and explosions have happened near her house, she said, causing their building to shake.

"It's so painful. It's really hard to describe what it feels like to go through such experience of bombardment that is ongoing," she said.

Prior to the latest escalation, the COVID-19 pandemic had already stretched Gaza's under-resourced health system, with around 80% of ICU beds already occupied, according to the ICRC. Now, Zakkout said, patients are being moved between hospitals to accommodate for the influx of injured.

"The professionals, doctors, nurses, they have been working in the past 15 years from three military operations and then the Great Return March and then the pandemic. I mean, they have not been given a break. So they are themselves tired, over fatigued, let's say, to start responding to this escalation."

The end of the Islamic holy month, Ramadan, came this week, but the atmosphere, rather than celebration with Eid, is a "climate of fear," Zakkout said.

"Streets are deserted. They are empty. No shops are open ... And it's really heartbreaking to see how the life of people can kind of change in a blink of an eye just for a decision to wage a conflict that doesn't put the civilians on the top of the agenda."

In the meantime, the conflict shows no signs of abating. Communal violence between Arab and Jewish communities in Israel, the likes of which have not been seen in decades, has added another worrying dimension to the escalation. Ugly scenes of beatings and rioting -- prompting emergency orders from the Israeli authorities -- have been seen across the country. At least six Palestinians were killed in widespread protests in the West Bank on Friday, the Palestinian Health Ministry said.

Hamas has continued to strike civilian targets in Israel, while Israeli Prime Minister Benjamin Netanyahu has warned that Hamas, and another Islamist group in Gaza, Islamic Jihad, will "pay a heavy price." Hamas has called for Palestinians to "set the ground ablaze under the feet of the occupation."

According to Ghassan Khatib, a political expert at Birzeit University in the West Bank, the outbreak of fighting could be politically advantageous to both Netanyahu and Hamas. The militant group has been able to seize on the "winning cause" of unrest in east Jerusalem to bolster its claims to represent all Palestinians, Khatib said. While for Netanyahu, the conflict helps distract from his own political crisis, of corruption charges, instability and unrest in Jerusalem, Khatib said.

"It is very worrying, especially as far as the humanitarian situation of the 2 million Palestinians in Gaza," Khatib said. "Because from previous experiences, no matter who claims victory politically, militarily, at the end of this, the main loser is going to be the population in Gaza, who will have a great deal of losses, material and lives."