Body of missing Fresno woman believed to be found

Investigators say they found Zillabell Jane Friesen driver's license, shoes and SUV in the area where the skeletal remains were located. But there are still many questions about exactly what happened.
KFSN 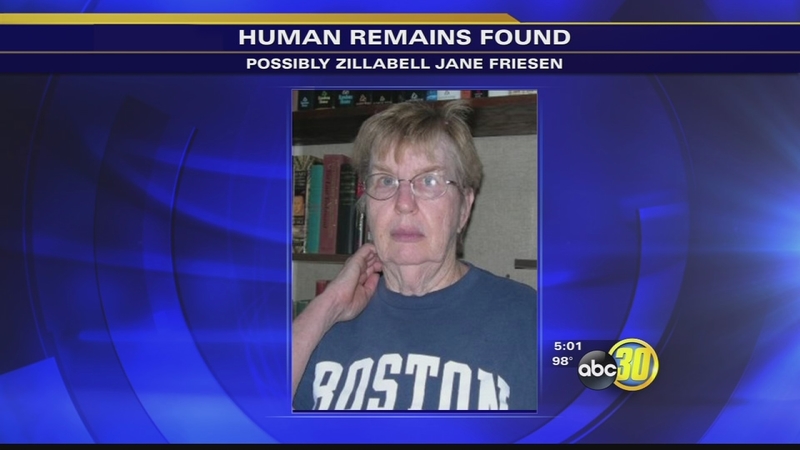 Body of missing Fresno woman believed to be found

FRESNO, Calif. (KFSN) -- The search for a missing Fresno woman appears to be over. Firefighters found human remains Sunday in a remote area of Fresno County, which are believed to be Zillabell Jane Friesen. The 81-year-old disappeared more than a month ago.

Friesen's children say she had a passion for exploring -- from Alaska to the local mountains.

"Mom, she loved to go out and drive and be in nature," said Melany Shaum, Friesen's daughter.

But it appears her hobby took a tragic turn in the Fresno County foothills. A fire crew assigned to the Rough Fire found Friesen's Ford Escape on a rugged federal road in the area of Trimmer Springs and Big Creek, near Pine Flat Lake, on Sunday.

"It was determined that approximately half mile north of where the vehicle was on that road, also on this federal road were skeletal remains believed to be that of Jane Friesen," said Fresno Police Chief Jerry Dyer.

Dyer says deputies and police detectives responded and also discovered Friesen's wallet, driver's license and shoes in the area, but no other clothing.

"There is a potential that based on what we have found, since there were only skeletal remains and no clothing, there is a possibility that there was some sort of animal attack," said Dyer.

Friesen was last seen buying gas at Kings Canyon Road and Chestnut Avenue on July 21. Authorities say she did not bring blood pressure medication with her, which could also have caused a medical problem in the high altitude. At this point, they do not suspect foul play was involved, but the investigation is ongoing.

"We've been praying for answers, and we got a few answers, but it opened up a whole other world of questions, and it's pretty certain that not all of the questions will get answered," said Shaum.