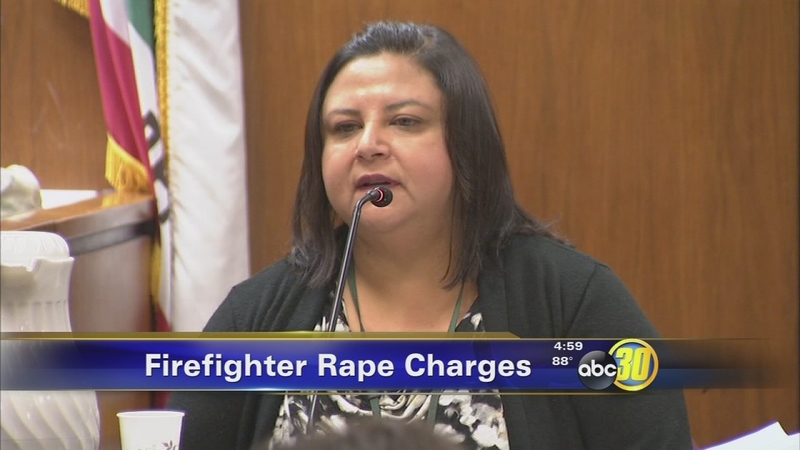 FRESNO, Calif. (KFSN) -- A Fresno firefighter will face a rape trial based on accusations from a young woman.

"Jane Doe began to cry, told her she was raped even though she said no," said Virginia Rodriguez, the Fresno County sheriff's investigator who interviewed the alleged victim and other witnesses.

But Jeffrey Sanchez is fighting hard and pointing fingers at the investigators. Sheriff's deputies arrested Sanchez in December, not long after he walked the 19-year-old out of his home.
For Sanchez, the trouble started even before the young woman he'd met the previous night left his house the next morning.

"She asked Jeffrey for her clothes and even made a comment to him saying why didn't he stop after she told him to stop," Rodriguez said.

The firefighter and the teenager met at a Clovis bar and went back to Sanchez's house with a group of friends. How their meeting even happened is one of several questions his defense attorney says investigators didn't even bother to answer as they railroaded his client.

"Did you ask her how she got into the bar to be able to drink?" asked defense attorney Jeff Hammerschmidt.

"You know initially that did slip my mind," Rodriguez said. "I didn't ask her during the interview."

But the 19-year-old was fairly clear about what happened at Sanchez's home. She said she only went there to make sure a friend wasn't alone. She tried to avoid Sanchez's advances. But after drinking fairly heavily and smoking a little pot, she felt like she lost control of her body and was powerless physically to keep Sanchez from having sex with her. But she did try verbally.

"She said she just felt like she couldn't move and she constantly told him to stop, probably about 30 times she kept telling him to stop," said Rodriguez.

Toxicology reports on the alleged victim showed no evidence of any date rape drug in her system -- just alcohol and marijuana. And being told to stop is another point of contention for Sanchez. He tells Action News the sexual contact was consensual. And his defense attorney points out the alleged victim was texting a friend during the contact.

"So you're aware that in all of the texts that were relayed to you, absolutely none of them referenced Jeffrey Sanchez doing anything physically to Jane Doe, correct?" Hammerschmidt asked Rodriguez.

"Not on text messages, no," the investigator said.

When the friend couldn't find her after more than 30 minutes, she called the police. When the alleged victim finally came out, they were waiting, and Sanchez would wind up in jail. Now, a judge has decided he should also wind up on trial.