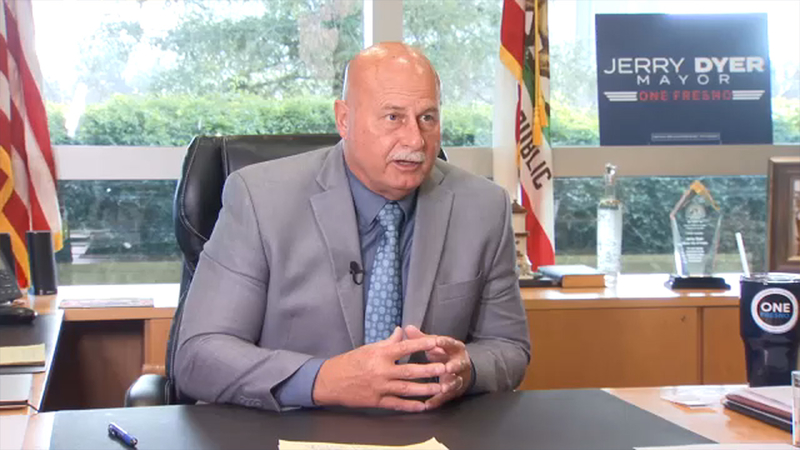 FRESNO, Calif. (KFSN) -- Fresno Mayor Jerry Dyer is now entering his second year in office, with plans to tackle some of the city's most important challenges in 2022.

In the two years since Dyer retired as police chief, gun violence has exploded in Fresno. The mayor says he wants to reverse that trend by adding officers to the department.

He also spoke about the plans to prevent public safety issues when the city's first pot shops are set to open this year.

In his first year in office, Mayor Dyer worked to carry out his vision of improving Fresno's curb appeal while addressing concerns about homelessness.

The Mayor of Fresno admits his first year on the job was rewarding but it did come with its share of challenges.

In 2022, Dyer says his mission is to improve safety across the city.

Dyer says the city will prioritize budget spending in 2022 to pay for additional police department resources.

After hiring Police Chief Paco Balderrama last January, Dyer made a conscious effort to take a step back from law enforcement initially.

Dyer's renewed focus on reducing crime comes as pot shops are set to open in Fresno, years after they became legal in California.

"There are mechanisms in place those businesses are safe, as par to the conditional use process. They all have to comply with certain conditions that ensure the safety of their customers and prevent any type of crime that occurs there that might be impactful for that neighborhood," Dyer said.

The city anticipates a windfall of more than $10 million in additional yearly revenue with the opening of those shops.

"I think you'll start to see many of the businesses open towards mid-2022, maybe some before that, but I think a majority will be the latter half of '22." the mayor said.

Dyer is also focusing on affordable housing and continuing to curb homelessness after rents rose 23% from 2020 to 2021.

"I believe it's going to take us four years in the City of Fresno to when we look around this city we're going to say where did the homeless go," he said.

Asked about the impact of COVID-19 on the city, Dyer said about 70% of all city employees are fully vaccinated. He has no plans to issue any sort of mandate at this time.