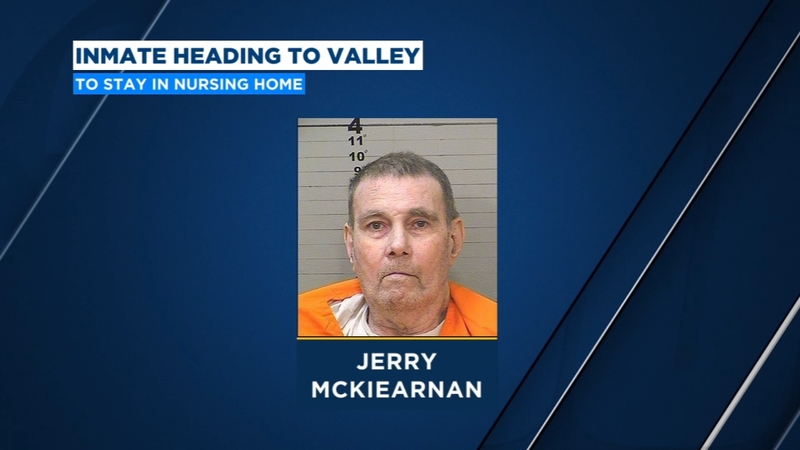 NOTE: This story contains graphic details that may be disturbing to some readers.

A 72-year-old man convicted for murdering his roommate 20 years ago is being transferred to a nursing home in the Central Valley.

The California Parole Board on Thursday recommended Jerry McKiearnan to be placed in a skilled nursing facility, most likely in Tulare County.

He will wear a GPS monitor, and not be allowed to leave without written approval. He will also be tested for drugs and alcohol, and is forbidden from having any weapons.

McKiearnan is currently serving a life sentence at the California Health Care Facility in Stockton and is not eligible for parole until 2026.

Tulare County District Attorney Tim Ward said he disagrees with the parole board's decision to move McKiearnan out of prison.

"I've been a prosecutor for a long time, but the crime scene photos prosecutors reviewed in preparing to argue against the defendant's placement were some of the most horrific I have ever seen," said Ward. "The proper placement for the defendant is behind prison walls and not back in our community or any other community in California."

in December 1999, McKiernan's roommate was found stabbed 42 times and dismembered in their residence.

A knife and a hacksaw with McKiearnan's fingerprints were found in the closet with the body parts.

In less than a year, he was found guilty of first-degree murder and was sentenced to 26 years-to-life in prison.
Report a correction or typo
Related topics:
tulare countynursing homeinmatesmurder
Copyright © 2021 KFSN-TV. All Rights Reserved.
More Videos
From CNN Newsource affiliates
TOP STORIES