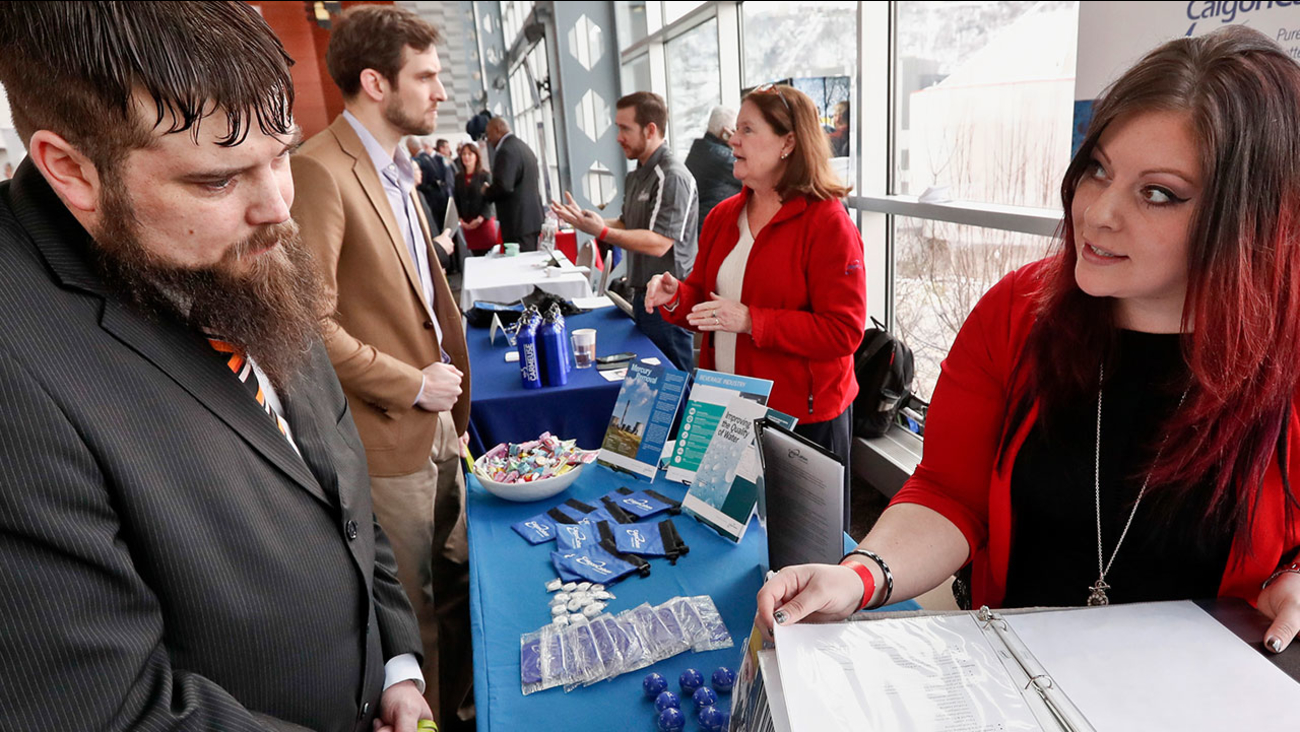 In this photo taken on Thursday, March 7, 2019, visitors to the Pittsburgh veterans job fair meet with recruiters at Heinz Field in Pittsburgh. (Keith Srakocic/AP Photo)

Hiring tumbled in February, with U.S. employers adding just 20,000 jobs, the smallest monthly gain in nearly a year and a half.

The sharp slowdown in hiring, which might have been worsened by unseasonably cold weather, came after employers had added a blockbuster 311,000 jobs in January, the most in nearly a year. In the past three months, job gains have averaged a solid 186,000.

Still, the pullback comes amid signs that growth is slowing because of a weaker global economy, a trade war between the United States and China, and signs of caution among consumers.

The unemployment rate fell to 3.8 percent last month from 4 percent in January, the Labor Department said in its monthly jobs report. Businesses stepped up their competition for workers and raised average hourly pay 3.4 percent from a year earlier, the largest gain in a decade.

Slowing global growth, a trade war with China and signs of increased caution among consumers have led many economists to forecast weaker growth in the first three months of this year.

Still, most analysts expect businesses to keep hiring and growth to rebound in the April-June quarter. It will be harder than usual, though, to get a precise read on the economy because many data reports are still delayed by the partial shutdown of the government, which ended Jan. 25.

In the meantime, there are cautionary signs. Consumer confidence fell sharply in January, held back by the shutdown and by a steep fall in stock prices in December. And Americans spent less over the winter holidays, with consumer spending falling in December by the most in five years.

Home sales fell last year and price gains are slowing after the average rate on a 30-year mortgage reached nearly 5 percent last year. Sales of new homes also cratered late last year before picking up in December. And U.S. businesses have cut their orders for equipment and machinery for the past two months, a sign that they are uncertain about their customer demand.

The economy is forecast to be slowing to an annual growth rate of just 1 percent in the first three months of this year, down from 2.6 percent in the October-December quarter. Growth reached nearly 3 percent for all of last year, the strongest pace since 2015.

Still, economists expect a rebound in the April-June quarter, and there are already signs of one: Consumer confidence rose in February along with the stock market.