Joe Biden's notes: 'Do not hold grudges' against Kamala Harris 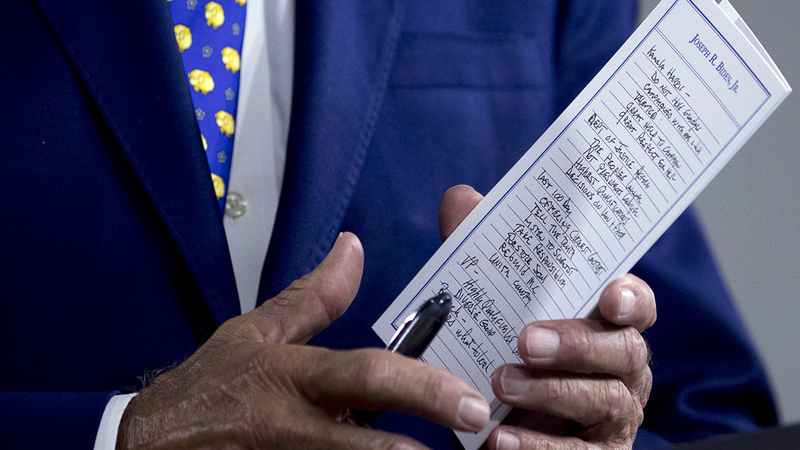 Biden on his vice presidential pick

WILMINGTON, Del. -- Joe Biden was uncharacteristically tight-lipped on Tuesday about the final stretch of his search for a vice president. But the presumptive Democratic presidential nominee seemed prepared to talk about at least one leading contender: California Sen. Kamala Harris.

As he took questions from reporters on Tuesday, Biden held notes that were captured by an Associated Press photographer. Harris' name was scrawled across the top, followed by five talking points.

"Do not hold grudges." "Campaigned with me & Jill." "Talented." "Great help to campaign." "Great respect for her." 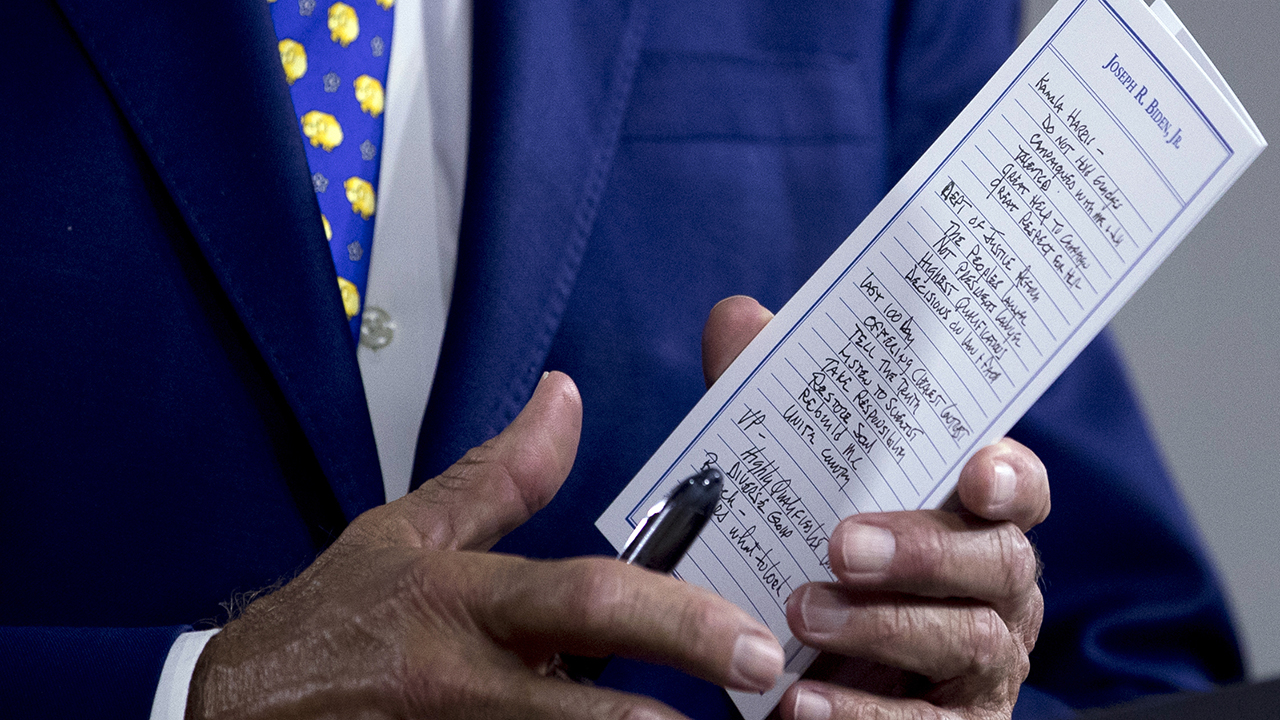 The notes of Democratic presidential candidate Joe Biden reference Sen. Kamala Harris among other things at a campaign event in Wilmington, Del. on July 28, 2020.

Those are all observations Biden has made about Harris before. But they take on new significance following a recent Politico report that one of Biden's closest friends and a co-chair of his vice presidential vetting committee, former Connecticut Sen. Chris Dodd, still harbors concerns about Harris' tough debate stage performance and that she hasn't expressed regret.

The comments attributed to Dodd have drawn condemnation, especially from influential Democratic women who maintain that Harris is being held to a standard that wouldn't apply to a man running for president.

The debate-stage skirmish was one of the seminal moments of the Democratic primary. Harris, who is Black, said Biden made "very hurtful" comments about his past work with segregationist senators before she slammed his opposition to busing as schools began to integrate.

"There was a little girl in California who was a part of the second class to integrate her public schools, and she was bused to school every day," she said. "And that little girl was me."

At the time, Biden called her comments "a mischaracterization of my position."

Biden has praised Harris publicly many times and noted that he's thought highly of her personally and professionally since she became close to his late son, Beau Biden, when both were state attorneys general.

It is common for high-profile politicians to take notes with them to the podium, either handwritten additions to formal remarks or a bullet-point list like what Biden held on stationery featuring his full name: Joseph R. Biden Jr.

In March, early in the coronavirus pandemic, President Donald Trump's notes were photographed to show "Chinese" written over "corona," part of the president's efforts to blame the pandemic on a foreign adversary. Last year, as Trump faced impeachment for pressuring Ukraine officials to help his reelection by finding dirt on Biden, the president had notes that read: "I want nothing" and "I want no quid pro quo."

Biden's list, at the least, suggests that he wants to defuse any tensions around his relationship with Harris. As reflected in his notes, Harris has become a reliable surrogate for Biden, appearing with him in online fundraisers amid the unusual social distancing standards forced on the campaign by the COVID-19 pandemic. As recently as last week, Harris headlined her own event for Biden, one focused on the Raleigh area in North Carolina, a battleground state where Harris' dual appeal to Black voters and college-educated white women could boost Democrats' prospects.

Biden ultimately did not field a question specifically about Harris. A spokesperson for Harris did not immediately respond to a request for comment.

In just his third extended news conference in four months, Biden also sidestepped specific questions about the timing of his decision on a running mate, an approach reflected in another entry on Biden's notepad. Under the heading "VP," Biden wrote "highly qualified" and "diverse group," signifying his intention not to tease out any more details.

Beyond vice presidential politics, Biden's topics included the Justice Department, an allusion to Attorney General William Barr testifying Tuesday on Capitol Hill. His notes did not name Barr, but Biden referenced "the people's lawyer ... not the president's lawyer," echoing his previous assertions that Barr has used his post as the latter.

On the "Last 100 days" of the campaign, Biden wrote that he'd be "offering clearest contrast," "tell the truth," "take responsibility" and "listen to the scientists" - all swipes at Trump.

Some Capitol riot suspects apologize as consequences sink in

Dominion Voting sues Fox for $1.6B over 2020 election claims