Joe Biden says, 'I get it,' after women accuse him of inappropriate touching 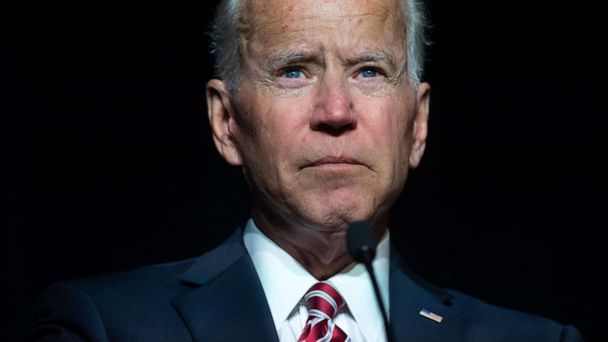 ABCNews
By MOLLY NAGLE
Former Vice President Joe Biden responded on Wednesday to the extensive criticism he's faced after several women accused him of making them uncomfortable with what they considered inappropriate touching.

In a two-minute video tweet, Biden said, "Social norms are changing. I understand that, and I've heard what these women are saying. Politics to me has always been about making connections, but I will be more mindful about respecting personal space in the future. That's my responsibility and I will meet it."

In his stepped-up damage control effort, Biden said that he has used physical touch -- hugs, handshakes, and hands on shoulders -- as a way of showing he cares and is listening, regardless of age or gender.

"Folks, in the coming month I expect to be talking about a whole lot of issues, and I'll always be direct with you. But today I want to talk about gestures of support and encouragement that I've made to women and some men that have made them uncomfortable," Biden said. "And I'll always try to be, in my career, I've always tried to make a human connection. That's my responsibility, I think. I shake hands, I hug people. I grab men and women by the shoulders and say "you can do this." And whether they're women, men, young, old, it's the way I've always been. It's the way I've tried to show I care about them and I'm listening," the 75-year-old Biden said.

"It's just who I am. And I've never thought of politics as cold and antiseptic. I've always thought it about connecting with people," he continued.

"I'll always believe governing quite frankly -- life for that matter -- is about connecting, about connecting with people. That won't change. But I will be more mindful and respectful of people's personal space, and that's a good thing. That's a good thing. I worked my whole life to empower women. I've worked my whole life to prevent abuse -- I've written -- and so the idea that I can't adjust to the fact that personal space is important, more important than it's ever been, is just not thinkable. I will. I will."

The response comes after four women have come forward to say they felt uncomfortable after interaction they had with the former vice president.

Lucy Flores, a former Nevada lawmaker, was the first woman to come forward last Friday to say Biden crossed a line when he put his hands on her shoulders, and kissed the back of her head while campaigning for her in 2014. Flores told ABC News that the interaction was "awkward and disturbing."

Amy Lappos told the Hartford Currant Monday said Biden rubbed noses with her at a 2009 fundraiser when she was a congressional aide to Rep. Jim Himes, D-Conn. Lappos shared her story with ABC News affiliate, WTNH, and said the action left her feeling uneasy.

"It wasn't sexual I don't think, but it was incredibly uncomfortable, and it was not how he greeted the congressmen," Lappos said Monday.

Two more women told the New York Times on Tuesday that they also felt uncomfortable after interactions they had with the former vice president.

Caitlyn Caruso, who was 19 at the time and is a sexual assault survivor, told the Times that during an event on sexual assault at the University of Nevada Las Vegas, Biden rested his hand on her thigh, and hugged her "just a little bit too long," leaving her uncomfortable.

"It doesn't even really cross your mind that such a person would dare perpetuate harm like that," Caruso told the Times. "These are supposed to be people you can trust."

D.J. Hill, 59, told the paper she met Biden at a 2012 fundraiser, and recalled Biden putting his hand on her shoulder before dropping it down her back while taking a photo, leaving her "very uncomfortable."

And while Biden says he understands that things are changing and that he will change his behavior, one thing left out of this video is a direct apology to the women who have come forward to share their discomfort -- something House Speaker Nancy Pelosi said on Tuesday that Biden needed to do.

"To say I'm sorry that you were offended -- is not an apology. I'm sorry I invaded your space, but not I'm sorry you were offended," Pelosi said Tuesday during an interview with Politico. "What's that? That's not accepting the fact that people think differently about communication whether it's a handshake or a hug."

Just minutes after the Biden video was posted to Twitter, it was announced that he had added an event this Friday to his schedule -- a speech to the International Brotherhood of Electrical Workers Construction and Maintenance Conference in Washington. He previously wasn't scheduled to make a public appearance until April 11.