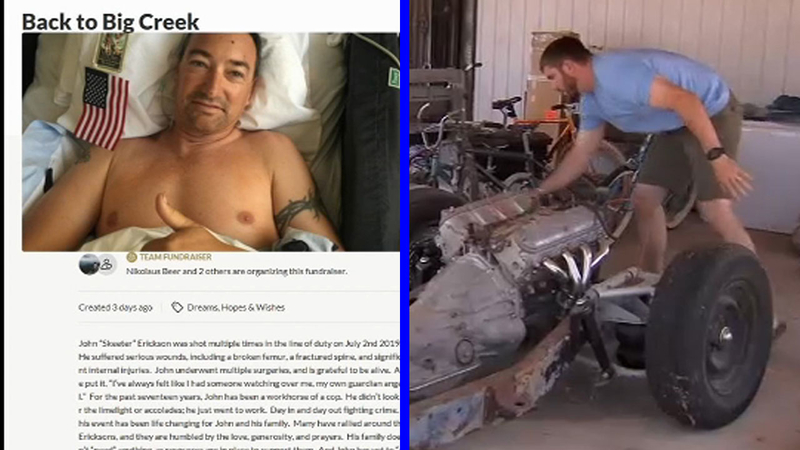 FRESNO, Calif. (KFSN) -- In a single day, Fresno County Sheriff's deputy John Erickson went from arresting suspects to the intensive care unit. Many who work alongside him thought that may be the last call he ever responds to. But even after taking a round to the lower back, he survived. And now some of those who police the mountains with him are bringing back to life an old classic Chevy truck.

"My goal is to just have a nice classic truck that I can enjoy. I've never had a nice car. Been working since I'm 13, I always wanted something nice. I never quite made it," he said.

Erickson was starting from scratch, rebuilding a replica 67 Chevy C-10. But a call on July 2 changed all of his plans.

Three gunshots, a shattered leg, and major abdominal damage meant a long recovery. He doesn't know if he will ever be able to work in patrol again.

Nick Beer is a US Forest Service officer who often responds to the same calls as Erickson. They are each other's back-up in an area that's rural and dangerous.

"I thought that we had lost John and another friend and I thank everything that we still have John here," he said.

Late nights at his bedside and deep conversations led John's friends to an idea that would inspire him and ensure he stays motivated as he recovers.

Officer Beer organized the restoration project with the help of their tight-knit group. He started a GoFundMe account to help pay for the costs of rebuilding the car from the ground up.

"This is just our opportunity to provide John with something he's hoped and dreamed of for a very long time," said Beer.

Erickson isn't able to physically help. But he stays busy researching and gets plenty of ideas from car magazines. He's also making lists of out what parts his friends will need for the project. Keeping his mind busy is also helping his state of health.

He has a picture of what he hopes a frame will eventually become. He wants it to be gunmetal gray. And he wants to take it to the mountains, specifically Big Creek, where he was raised.

"We had older cars growing up when I was young and it seems to come back in my older life, I enjoy the same things," Erickson said.

Already, word is spreading about the restoration project. People and businesses are pitching in. Erickson is embracing the future and looking forward to driving back up to the mountains in a new ride.

Erickson is continuing to go to rehab. But for now he is enjoying his new role as project supervisor. He can't wait to get behind the wheel once it's done.