Both sides told the jury that a verdict in their favor would give their clients their lives back.
AP
By Denise Lavoie, Associated Press 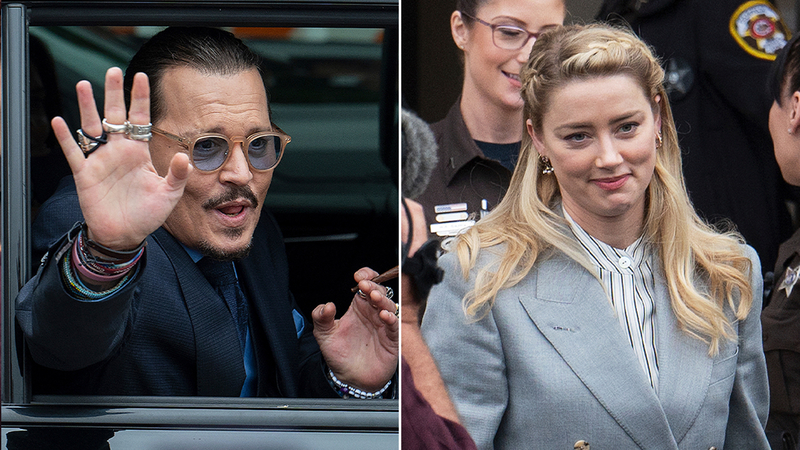 FAIRFAX, Va. -- A jury has resumed deliberations after a sensational six-week trial to resolve defamation claims by Johnny Depp and his ex-wife Amber Heard over their volatile and unhappy marriage.

Depp is suing Heard for $50 million, accusing her of libeling him with a 2018 op-ed she wrote describing herself as "a public figure representing domestic abuse." Heard filed a $100 million counterclaim against the "Pirates of the Caribbean" star after his lawyer called her allegations a hoax. Each accuses the other of destroying their career.

A look at the highlights of the defamation trial between Johnny Depp and Amber Heard as closing arguments begin.

Testimony featured a litany of lurid details of their short marriage. Heard testified that Depp physically or sexually assaulted her more than a dozen times. During his testimony, Depp testified that he never struck Heard, that she concocted the abuse allegations, and that she was the one who physically attacked him, multiple times.

During closing arguments, both sides told the jury that a verdict in their favor would give their clients their lives back.
Report a correction or typo
Related topics:
virginiatrialjohnny deppcourt caseu.s. & world
Copyright © 2022 by The Associated Press. All Rights Reserved.
JOHNNY DEPP
Hear from a juror in the Depp-Heard trial for the first time
Johnny Depp's legal team discusses victory in defamation case
Jury sides with Depp on lawsuit, Heard on counterclaim
Who will the jury side with in Depp-Heard defamation trial?
TOP STORIES
1 killed, multiple hospitalized after fiery crash in Merced Co.: CHP
Madera parents plead guilty in death of 2-year-old Thaddeus Sran
50 migrants die after 18-wheeler abandoned in Texas heat
Witness: Trump grabbed steering wheel, demanded to go to Capitol
4 dead, 150 injured after Amtrak train derails in Missouri
Fresno's food truck community comes together to support Planet Vegan
'Safe and sane' fireworks officially on sale in Valley
Show More
Legislators moving forward with audit of CSU system
37 pounds of pills believed to be fentanyl found in Merced County: CHP
Why you should pay down your credit cards right now
Valley father drowns while swimming in Fresno County pond
Epstein associate Ghislaine Maxwell sentenced to 20 years in prison
More TOP STORIES News