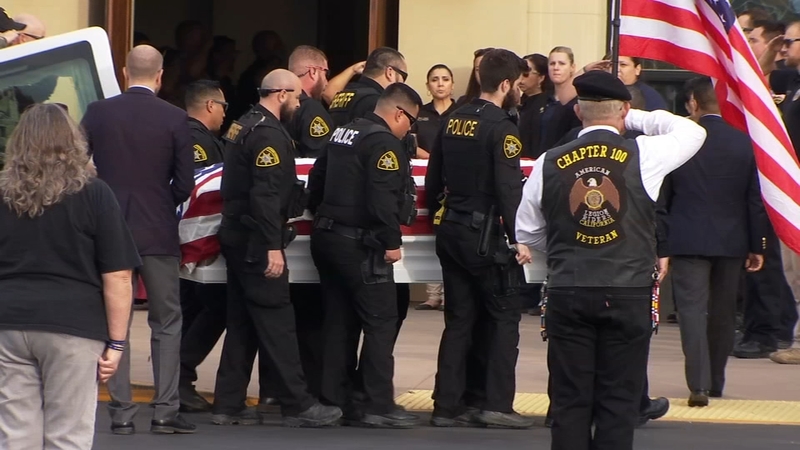 LEMOORE, Calif. (KFSN) -- In Lemoore, a community came together to say their final goodbye to fallen Officer Jonathon Diaz on Thursday.

He was killed after a shooting broke out at a birthday party he was attending in Hanford.

There was a steady stream of support at St. Peter's Church as folks came to say their final goodbyes to Officer Diaz.

"He was protecting, he was doing God's work. It's tough," said Amoroso.

Signs of support and waving flags could be seen along the path of his procession from Fresno back home to Lemoore.

Diaz was welcomed by family when he arrived at the church.

"We really miss him. I wish I could've said goodbye to him one more time," said Jason Alas, Diaz's cousin.

Diaz was killed while off duty at a birthday party in Hanford after intervening in a domestic violence situation.

Officers with the Lemoore Police department are leaning on each other during this time, but say the community is helping them heal.

"There's not a day that goes by that there are gifts, flowers," said Lemoore Police Sgt. Mark Pescatore.

Amoroso worked with Diaz at the police academy and said he was a passionate and energetic officer.

"That's what we want law enforcement officers to do. We want them to be like Officer Diaz and make a difference in your community," he said.

While Diaz's family and law enforcement brothers and sisters are getting ready to lay him to rest, Amaroso said he'll always hold a permanent place in their hearts.