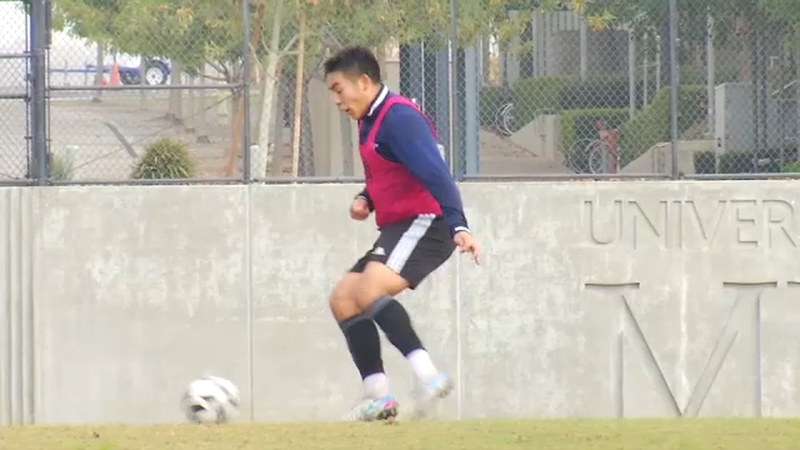 MERCED, Calif. (KFSN) -- UC Merced's men's soccer team is quietly building a reputation as a dominant program in the NAIA.

The Bobcats are coming off four straight trips to the national championship tournament despite coming into existence less than a decade ago.

This year's squad is poised to make another run in the postseason, led by senior Juan Flores, who first grabbed headlines while helping McLane High win a Valley title in 2016.

"He's very often the focal point of the other team's defense. We will move him around, we'll put him on the wing a little bit, sometimes we'll push him a little higher as a forward," said Bobcats head coach Albert Martins.

A natural attacking midfielder, Flores' vision and play-making ability has helped the Bobcats to a conference-best 5-1 record while leading the team with nine goals this season.

"You got to take the ball sometimes and make your own plays but look at the players around you and if there's a better chance, why not give it to them," Flores said.

Playing in the middle of the park demands great creativity.

His coach calls him the team's engine, the way he uses his body and ball skills to fend off defenders but can slip into open space when play allows to slot one past the goalkeeper.

"He can move you around a bit and he plays Chess with you to where you think you got into a physical battle, and he's just right by you. I'd say his size matching up with his skill is what sets him apart from anybody else we've had here," Martins said.

A sought-after recruit coming out of McLane, where he was named the North Yosemite League Player of the Year twice.

"I like moving the ball, I like playing with people and touching around. Most of the big schools that were offering me were usually the "kick ball" schools and I didn't want to play that. I talked to Coach Martins. I understood his philosophy," he said.

The business major's dedication to the school has never wavered and he decided to return for one more season.

College athletes were all granted an extra year of eligibility because of COVID.

"I feel like UC Merced is a part of my life now," he said. "I just felt like I needed to give back because they've given me so much opportunity and here was an opportunity for me to give back."