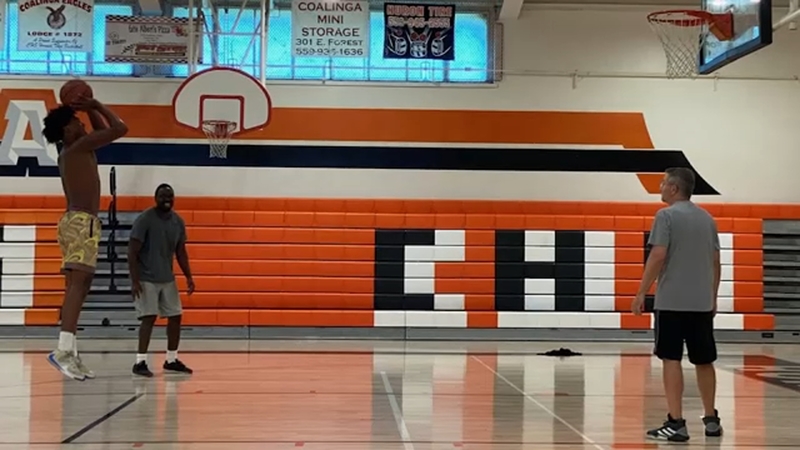 COALINGA, Calif. (KFSN) -- In a town of 17,000 people, Julius Olanrewaju stands out. The 6'4 freshman guard grew up with a basketball in his hand.

His father is the head coach of the West Hills College Coalinga basketball team.

"It was a big way of showing how life works if that makes sense," Olanrewaju said. "He taught us that everything takes hard work. That was his way of showing what it takes."

Horned Toads Head Coach Jason McFarlin is in his 19th year coaching at the varsity level. He says he never imagined that Julius would be having the season he's having in his first year on varsity.

"You never know how they're going to mature athletically," McFarlin said. "Obviously, I knew he would be a good player for us because he's just really skilled and discipline. He's blossomed so much in the last six months. He couldn't dunk in September, now he's catching lobs off the backboard in a game."

As a freshman, Olanrewaju leads the nation in scoring. He ranks 13th in all grade levels. The Horned Toad is averaging 31.5 points per game and is shooting 41 percent from deep. He works on his game three times a day.

His discipline is paying off. In December, he broke the school scoring record with 49 points.

"I was shocked," Julius said. "I remember I was at the college shooting around, coach called me and said, 'Julius, you broke the record.' At the time, I didn't really process it, but then he called me again and I sat down and I was shocked."

He puts the work in on the hardwood and in the classroom, he is nearly a perfect student.

One of those dreams is playing for one of the most prestigious basketball programs in the country.

"My dream college is Kanas," Julius said. "That's where I want to go."

Until then, the Horned Toads are focusing on the postseason.

Coalinga hopes this will be the year they claim their first-ever Central Section championship with the freshman Phenom leading the way.