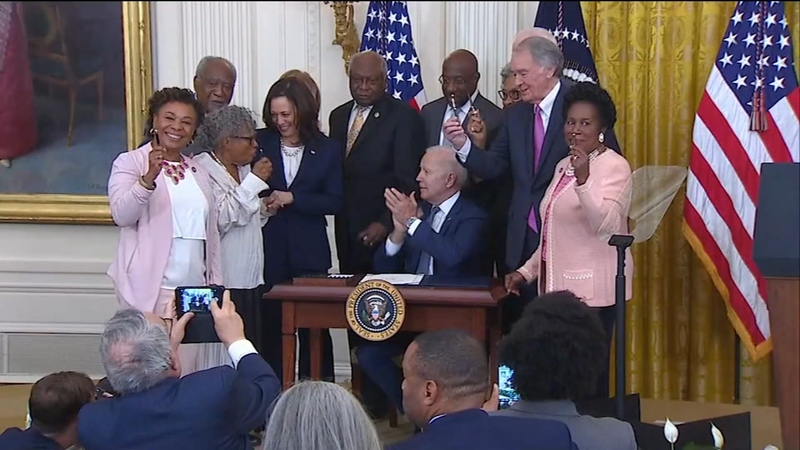 FRESNO, Calif. (KFSN) -- President Joe Biden signed a bill Thursday establishing Juneteenth, the first day of freedom for enslaved Africans in Texas and commemorates the end of slavery in the United States, as a national holiday.

This is the first new federal holiday since Martin Luther King Jr. Day was signed into law nearly 40 years ago.

"Great nations don't walk away. We come to terms with the mistakes we made. And remembering those moments, we begin to heal and grow stronger," Biden said during his remarks.

2021 marks the 155th anniversary of Juneteenth, the holiday that recognizes the first day of freedom for enslaved Africans in Texas and commemorates the end of slavery in the United States as a whole.

Community members are celebrating this moment.

"It's a milestone in the history of the country, and it's a recognition of our humanity as African Americans," Kehinde Solwazi, a Fresno Juneteenth Collaborative Council Member.

But many also acknowledge the social and racial justice work that remains to be done.

"Our country is poised to make such a dramatic change. Hopefully, this symbolizes that change that has come," Francine Oputa, a Fresno-based diversity and inclusion consultant said.

The legislation gained momentum in the wake of the killing of George Floyd and the Black Lives Matter protests that followed.

"I don't think without the past year, this would've happened so soon," said Mistique Davis of the Fresno State NAACP.

There was overwhelming bipartisan support in Congress. The bill passed unanimously in the Senate. 14 House Republicans opposed it.

In a statement, California District 4 Representative Tom McClintock says, "I voted against the 'Juneteenth National Independence Day Act' because I don't believe it's healthy to reach into the dead past, revive its most malevolent conflicts and re-introduce them into our age."