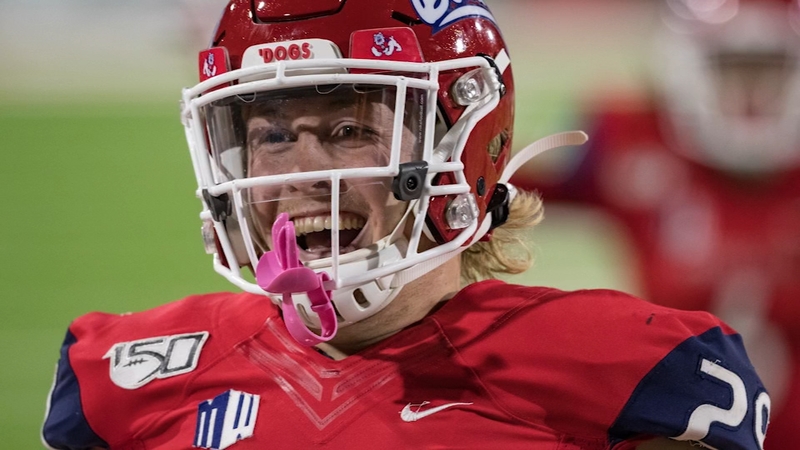 FRESNO, Calif. (KFSN) -- Justin Rice grew up on the gridiron. His father played DI football at Cal and UC Davis, and all three sons followed in his footsteps

"It was kind of fun when we had my little brother's game on Thursdays, mine on Friday and Jared's game on Saturdays," he said. "So it was a whole weekend of football growing up. Definitely hectic, especially for my parents driving us to and from things."

Entering his senior year at Fresno State, he wants to carry on the legacy set by his older brother, Jared.

"Just being around the guys for a whole year, I got to know a lot of them coming in," he said. "So that was a really easy transition for me knowing a bunch of guys; not just the class I was coming in with, but the guys above me too, so it made it really easy."

His biggest asset might be his versatility. His freshman year, he came in as a running back. Coach Tedford then moved him to safety, then again to linebacker.

In his first full year at the position, he was a First Team All-Mountain West selection and he was just named the preseason conference Defensive Player of the Year.

"You can call the shots as much as you can, the coaches call the plays, but you help get everything lined up, set the tempo and everything," he said. "You have to be physical. If you get a big hit, it gets the defense going."

Rice is looking forward to taking his younger brother under his wing. Jack Rice walked on to the team this spring and has chosen the same position.

"He chose linebacker and not tight end, I gave that to Jared a little bit," Justin said. "I can teach him some things that I've learned at linebacker over the past couple years and speed up that processs for him."

His favorite pre-game meal is chicken noodle soup, his favorite NFL player is Luke Kuechly and his favorite team is the New England Patriots.

"had to have my soup, chicken noodle soup before the game."