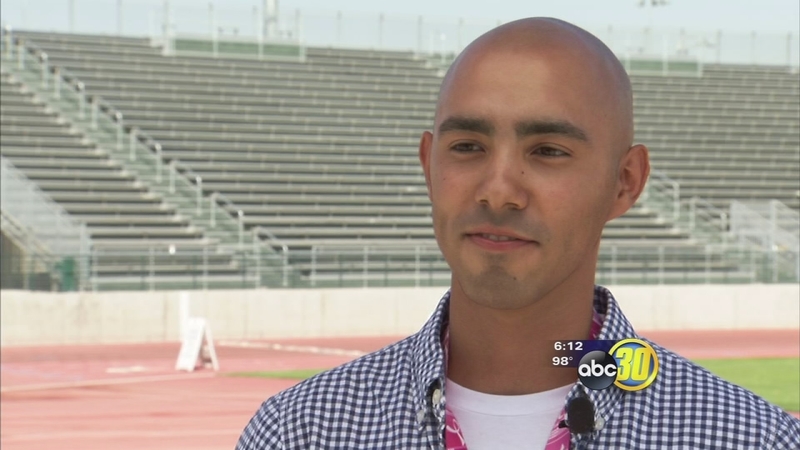 KINGSBURG, Calif. (KFSN) -- A high school football player has won the fight of his life after getting a devastating diagnosis last year.

The last nine months have been trying for Jose Valencia and his family, but on Monday, with a clean bill of health, he returned back to school for his first day of his senior year at Kingsburg High School.

With his twin brother at his side, Jose seemed to not even skip a beat as he returned back to campus.

"It's been exciting watching him talk to everybody else and everybody wanting to talk to him," said Carlos Valencia, Jose's twin brother.

After experiencing unusual aches and pains while playing football last year, Jose ultimately ended up at Valley Children's Hospital where he was dealt a major blow. Doctors diagnosed him with stage 4 Ewing sarcoma, or bone cancer.

Despite not being able to walk at first, Jose kept positive. After enduring eight months of chemotherapy and radiation, a recent MRI revealed he is mostly cancer-free.

"He was fighting! He was doing really good, and now that it's over and done with and looks like it's going to be good, we're all happy about it. We're all relieved," Carlos said.

Carlos says his brother was even back in the weight room within a day after his last chemotherapy treatment. While he isn't well-enough to be back on the football field, he'll be on the sidelines helping coach his former teammates.

Though his disease kept him out of school, he didn't let it keep him down. He took online classes to keep him on track toward graduating on time.

"Just good to be back finally. I'm actually ready to do some homework," Jose said.

"First day back at school for all of our Vikings, we had 1,200 kids returning, and of course when they find out Jose's coming back it really is the shot in the arm that any student body wants to have," Principal Fred Cogan said.

A student body and community that helped raise $10,000 for the Valencia family during Jose's cancer battle. Jose and his family want to thank everyone that's helped them along the way to turn this fighter into a survivor.