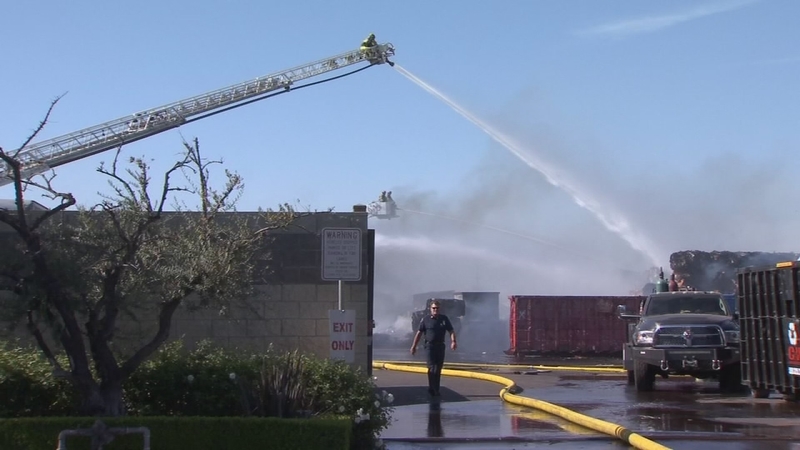 FRESNO, Calif. (KFSN) -- Firefighters say it likely only took a tiny spark - a perfect mixture of wind, high temperatures, and heavy machinery to catch several mounds of cardboard at Clovis Recycling on fire.

"I see flames going crazy. Next, it spread all the way to the front," said Angel Nino who works next door.

Employees who work nearby say it took only seconds for all four piles of recyclables to burn. By the time firefighters arrived, the wall of flames more than 20 feet tall, was moving dangerously close to a nearby building.

"All the boxes they already had pressed into recycling bins that were back there getting ready to get shipped out, you just saw all the debris flying into the air," said Nino.

Two operations were going on simultaneously. While firefighters focused on the fire, paramedics were there to ensure those crews didn't overheat.

"It's 100 degrees, you have direct sun, we have full gear on which is designed to protect us from these types of structure fires, and that gear is very heavy and hot," said Clovis Fire Chief John Binaski.

Hearing reports of a fire near Clovis Recycling. You can see smoke rising from the freeway. We'll have more details coming up @ABC30 pic.twitter.com/tq34ynDMZ7

Firefighters had to be rotated out every 20 minutes. They were put into cooling chairs and had their heart rate checked by American Ambulance before they could rejoin the fight. Chief Binaski says recycling centers are particularly hazardous because everything is so flammable.

"They did have adequate spacing, they did have a fire hose here on site, but they say by the time they turned around, the bundle was three quarters the way on fire. They just couldn't put it out," said Chief Binaski.

More than 35 firefighters were ultimately able to limit the damage.

The Clovis Fire Department was called out to a large fire at Clovis Recycling on Wednesday that kept firefighters busy well into Thursday.