A vegetation fire has prompted some mandatory evacuations in the Fresno County foothills south of Auberry.
KFSN
By Jessica Harrington and ABC30.Com Staff 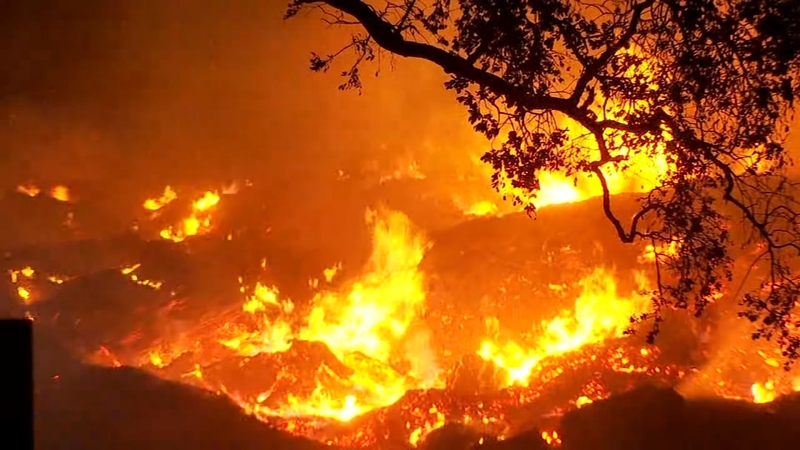 A pile of lumber surrounded by homes and businesses caught fire around noon. Officials said the lot is about one acre by one acre.

Richard Templeton was working at Bruce's Auberry Service Center Wednesday afternoon when he looked up and saw a small fire across the street.

He went inside to tell his boss, who quickly realized it was not a controlled burn.

"He comes out and he's all 'Call 911' and I called 911 and said 'yeah, we got a fire.' Because from the time I walked in to tell him to come back out here, it went from like maybe six feet wide to like 10 feet wide," said Templeton.

Templeton said he and his boss have seen the logs piled across the street for several years.

They've been concerned about a potential fire, until about a month ago when a crew came in and started sawing the logs.

"We were happy to see it get milled because it was just a big matchbox," Templeton said.

Fire officials said the crew was actively sawing wood Wednesday when the fire started and the lumber went up in flames quickly.

"I just saw fire and the next thing you know, it was a major fire," said

Mandatory evacuations were put in place and power was shut off to more than 3,000 customers.

By early evening, the fire was contained to just the log deck, mandatory evacuations were lifted and power was fully restored.

Crews worked by hand to put out hotspots before the evening winds kicked up.

"It was so tall and so dead of fuel that we're just trying to contain those live embers that are coming out of that deck itself," said Cal Fire Fresno County Asst. Chief Michael Bowman.

Officials expect the fire to continue to burn through Friday.

"We did a good job today (Wednesday) putting it out, we just need to make sure it stays out," said Bowman.

The Fresno County Sheriff's Office is making it easy for Fresno County residents to see whether or not they are in an evacuation zone.

They've created an interactive map where residents can type in their address and see if it's under evacuation orders.

You can find a link to the page here.