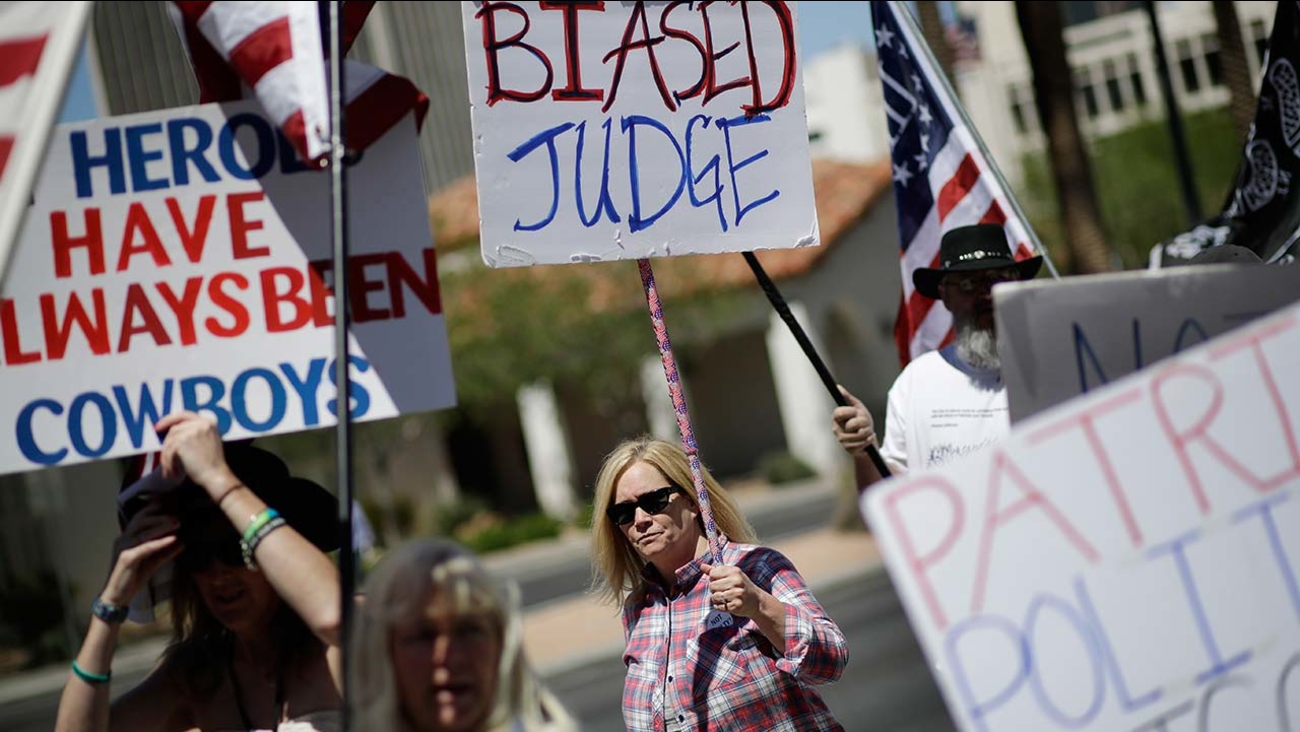 Marie Ries, center, marches with others in support of defendants on trial in federal court, Wednesday, April 12, 2017, in Las Vegas. (John Locher)

LAS VEGAS -- A jury found two men guilty of federal charges Monday in an armed standoff that stopped federal agents from rounding up cattle near Cliven Bundy's Nevada ranch in 2014.

Jurors said in a note they were deadlocked on charges against four other men, but the judge sent them back to keep deliberating. Gregory Burleson of Arizona was found guilty of eight charges, including threatening and assaulting a federal officer. Todd Engel of Idaho was found guilty of obstruction and extortion.

The trial was the first of three in federal court in Las Vegas arising from the standoff, which was hailed as a victory by states' rights advocates who want vast stretches of federal land in the U.S. West put under local control.

It is seen as a preview for an upcoming trial for Bundy; his eldest sons, Ammon and Ryan Bundy; and two other defendants who prosecutors have characterized as leaders of the conspiracy.

The Bundys have become symbols in the long-running fight over government-owned land. The sons also were accused of leading a 41-day armed occupation of a federal wildlife refuge in Oregon last year. They were acquitted of all charges but kept behind bars to face trial in the earlier standoff near their father's ranch.

Prosecutors characterized the six as the least culpable of the 17 people to be tried in the case.

Jurors heard testimony and saw photos of each defendant with an assault-style rifle during the tense standoff where more than 100 protesters shouted for heavily armed federal agents to release nearly 400 cows.

The government was enforcing court orders to get Bundy's cattle off public lands for failing to pay grazing fees.

No shots were fired in the standoff. But it is illegal to brandish assault-style weapons against federal agents, Acting Nevada U.S. Attorney Steven Myhre said.

The defendants argued they came to Nevada to exercise constitutional rights of free speech and weapon possession after seeing accounts of Bundy family members met with police dogs, knocked down, stun-gunned and arrested in earlier scuffles with federal agents.

Parker was famously photographed lying on a freeway overpass, looking with his AK-47-style rifle through a seam in a concrete barrier toward agents below.

Stewart stood next to Parker with a rifle on his shoulder. Drexler lay at another seam in the barrier.

Burleson was seen climbing the sides of a riverbed, closer to the crowd of Bundy backers, including unarmed men, women and children.

Agents demanded the crowd disperse. A local sheriff brokered a truce and the cows were released.