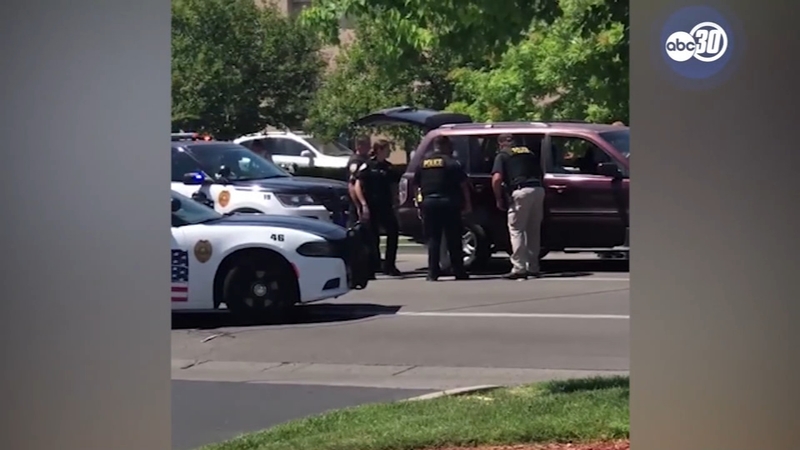 LEMOORE, Calif. (KFSN) -- A Lemoore City Council member's arrest was caught on camera following a series of events that the police chief could only describe as bizarre.

Holly Blair is now in police custody after police chief Darrell Smith says she nearly hit several officers and bystanders with her car before leading officers on a chase.

"The officers had to get out of the way in order to avoid being struck by the vehicle," Smith said.

He says several officers and children were near the compound around Wednesday afternoon when a Honda Pilot being driven by Blair sped into the lot, then quickly turned around, and sped out.

Smith says officers started to chase Blair with lights and sirens, but she failed to stop.

The chase, came to an end near Cinnamon and Lemoore, where police surrounded the vehicle -- Blair's young son and dog also inside the car.

Smith doesn't know what led to the dangerous pursuit, but say she's been stopped by law enforcement before.

"I can only describe today's behavior as very bizarre," he said. "She hasn't attended the last two council meetings...she's normally very active on Facebook. Recently there hasn't been any activity."

Earlier this year, the city requested a temporary restraining order against Blair for comments she made out other council members and police officers, which was later rescinded.

The city manager, however, says after this incident, he's directed the city attorney to take another look at a restraining order.

"Blatant disregard. I think Ms. Blair had shown hatred toward law enforcement in general," Olson said. "Because I do fear the safety of our employees after this incident."

Blair's bail is now up to $200,000. She is charged with several felonies including child endangerment and assault with a deadly weapon.

Here's the booking information/charges against Lemoore City Councilmember Holly Blair. She was arrested by @lemoore_pd this afternoon. @ABC30 @NathalieABC30 pic.twitter.com/WRDZAFfUdv