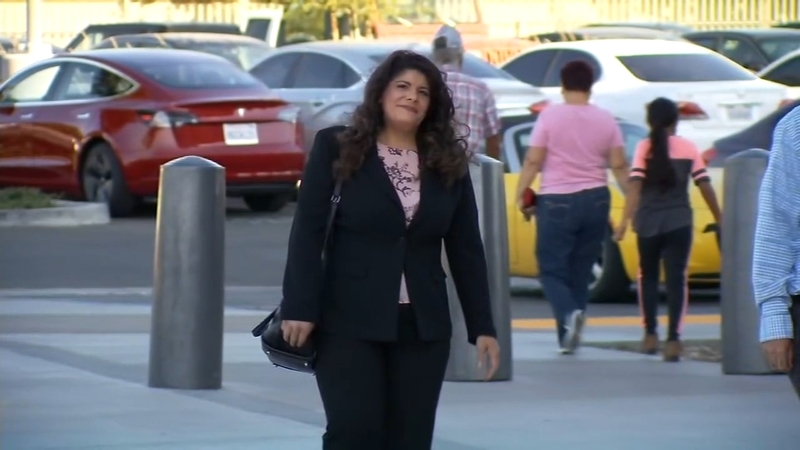 HANFORD, Calif. -- Friday morning, Lemoore City Councilmember Holly Blair told a Kings County judge she wanted to hire her own attorney, but hadn't spoken to one yet.

The judge set another court date and signed off on two protective orders.

They prevent Blair from contacting Crystal Giles and her 9-year-old daughter or coming within 100 yards of them.

She is accused of nearly hitting both with her car in the rear parking lot of the Lemoore Police Department one month ago.

Blair had no comment when approached by Action News after the hearing.

Last week, she was charged with three felony counts of assault with a deadly weapon for what happened in the lot, plus another felony count of evading an officer for the pursuit that followed.

She's also charged with misdemeanors including child endangerment (police say her son was in the backseat), resisting a peace officer for refusing to get out of her SUV once the pursuit stopped, and reckless driving in a parking lot.

"There's people that she really could have hurt that day and she needs to see those people and know what effect she had on that day to people," Crystal Giles said.

Giles is the widow of a Lemoore Police Officer who took his own life in last fall.

She and her children were among those gathered in the Lemoore Police lot, getting ready to start a procession that was part of a police chaplain's trip to raise awareness of mental health in law enforcement.

But Giles said Blair barreled into the lot, nearly hitting her and her daughter.

Prosecutors say police body camera video only captured the last part of what happened in the lot-when Blair, on her way out, came close to hitting an officer who was pulling in.

'I don't have ill feelings towards her," Giles said. "She just needs to be held responsible for her actions that day."

Lemoore's city manager was also at Blair's hearing on Friday.

He says if she misses one more council meeting, her council seat will be vacated.

Blair will be back in court on July 25th.