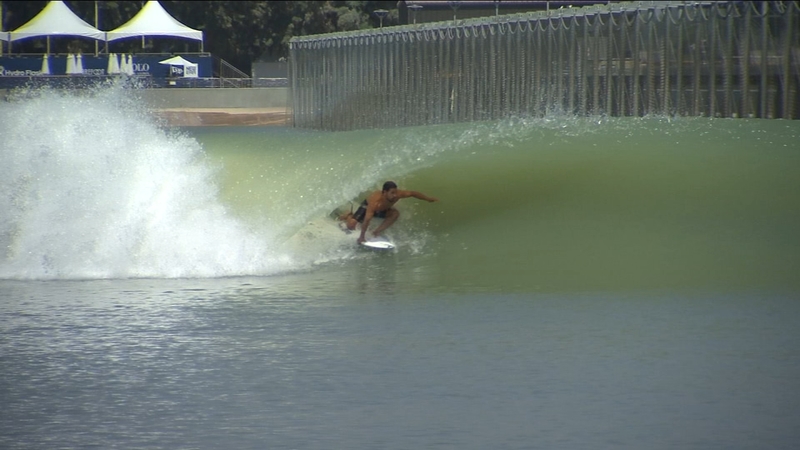 LEMOORE, Calif. (KFSN) -- The world's top surfers have come a long way from their favorite beaches to an unlikely surfing hot spot: Lemoore.

Kelly Slater's wave pool is mind-blowing. His dream of creating that perfect wave has been realized.

This week's Surf Ranch Pro event in Lemoore proves you don't need the ocean to throw a beach party.

The World Surfing League is riding a wave of gender equity. Beginning next year, it will award equal prize money to both men and women.

WSL CEO Sophie Goldschmidt said, "I think we are the first and only global sports league to now have equal prize money which is a significant milestone."

Surfers also never thought they'd be riding man-made waves in the middle of farmland, but they've grown used to it.

It is a surreal sight to see. An 80-ton foil churning through the water to create the perfect wave. The "Lemoore Pipeline," if you will, and we're 100 miles inland.

Everyone gets the same wave, but the sport's elite will separate themselves at Surf Ranch Pro.

Slater said, "Somebody at some point is going to set that bar at a certain point, and everyone behind them and after them is going to have to match that, and that's where the pressure is going to come in."

I asked the surf legend about surf conditions when Kings County gets cold and foggy. Slater replied, "I've surfed in November and December here. Cold and windy. Freezing cold water like 50 degrees, maybe high 40's. It's pretty brutal, but we're planning to be open in the winter time."

Competition at Slater's Surf Ranch gets going tomorrow and finishes up on Sunday.