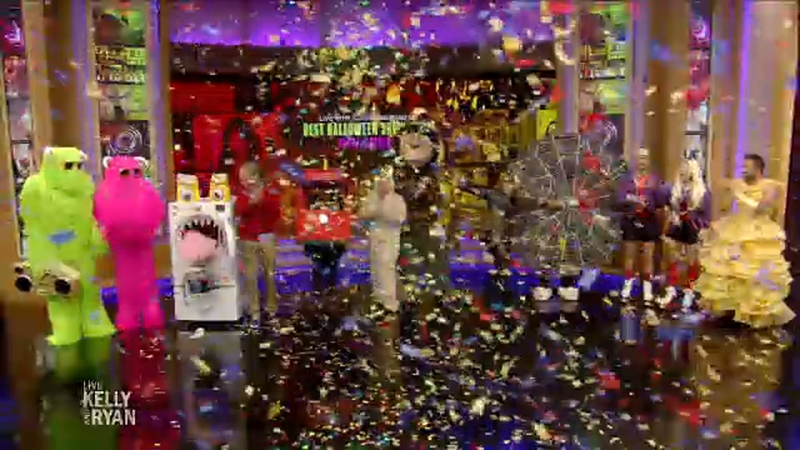 NEW YORK -- It's become a Halloween tradition at "Live with Kelly and Ryan" -- each year the costumes of the audience who come to see the show seem to get more elaborate and the costume changes of the hosts become more numerous.

In 2017, Kelly Ripa and Ryan Seacrest switched identities and came out as each other. Last year, they stepped into a way, way back machine to recall old TV shows.

Wednesday morning on "Live's Best Halloween Show Ever (Viral Edition)" they started the show dressed up as cowboys. After returning from a break they dressed up as the "Baby Shark" family.

Reporter Sandy Kenyon checks out the spooky characters lined up outside WABC-TV studios ahead of this year's special Halloween edition of LIVE with Kelly and Ryan!

To call the preparations "elaborate" to pull off this show would be an understatement. Ripa says she is, "really sort of astounded at what we come up with and how, you know, how much planning it takes."

As in previous years, the audience arrived in costume. One viewer dressed up as a washing machine with eyes and a huge tongue took home the grand prize of $6,000.

Other finalists who made it on stage were awarded $1,000 for their creativity.

RELATED: Tricks and treats for 'Live with Kelly and Ryan' and their EPIC Halloween show

"These two," said Executive Producer Michael Gelman pointing to the hosts, "are willing to do almost anything. There's a lot of hemming and hawing, and I don't know, and in the end, they do it."

In part that's because the two friends are so comfortable with each other, and even Gelman gets into the act. There's a method to this madness: the annual episode always boosts ratings.

"Every year we go so crazy and so big," Gelman said. "That you want it to be better the next year, but it's hard to keep topping ourselves."

For the first time this year, entertainment reporter Sandy Kenyon's alter-ego, cranky critic Randy Kenyon, made an appearance on the Halloween show. Randy previewed the movie "Cats" and all of it's many, many sequels like, bats, rats, and gnats.

WATCH: Reporter Sandy Kenyon checks in with costumed revelers before the show!