The exchange brought families from across the country together in one life-saving circle and even COVID-19 couldn't keep them apart.
KFSN 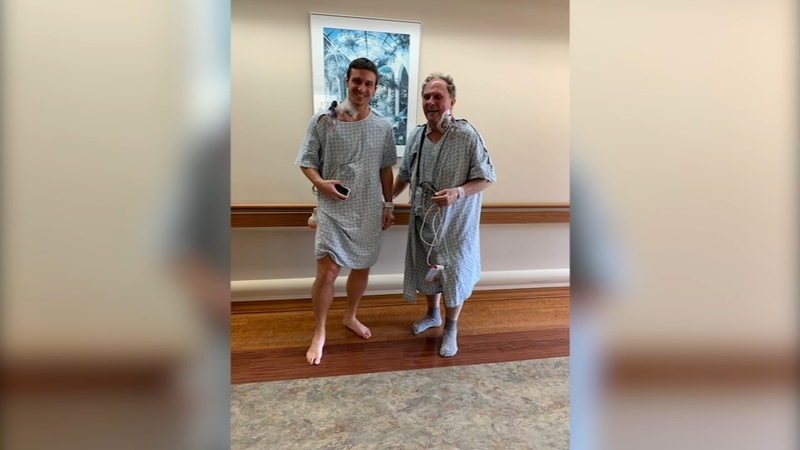 FRESNO, Calif. (KFSN) -- A Fresno man and his uncle are bonded by even more than blood.

When George Rogers needed a liver transplant, his nephew Casey selflessly stepped in, not to donate to his own relative but to a total stranger, which in turn, helped his uncle.

The 'living donor exchange' brought families together from across the country in one life-saving circle and even COVID-19 couldn't keep them apart.

Rogers was told his liver was failing in 2018, and he quickly started his search for a new one.

"It would seem like we would have something set up and have the rug pulled from under us," Rogers says.

His nephew, Casey Rogers, helped with the search and later learned of the Living Liver Donor procedure from a friend.

The operation involves replacing a patient's liver with a portion of a liver taken from a healthy patient, and the organ in both patients eventually grow to a normal size.

Rogers says they were going to get surgery in New York, but after the hospital was overrun by COVID-19 patients they were referred to Dr. Abhi Humar at the University of Pittsburgh medical center.

"Only about 5% of transplants are done from a living donor. 95% are from a deceased donor," Humar says.

Dr. Humar says another family was at the hospital when George and Casey arrived looking for a donor.

Josiah Leach wasn't a match for his own family member, but he was for Rogers.

"Within a few hours, I could feel I was to the health before I came down with Liver Failure," Rogers says.

Casey, still wanting to help, donated a portion of his liver to a Pennsylvania man named Tim Corbin.

Dr. Humar says he just wants people to know this procedure is an option.