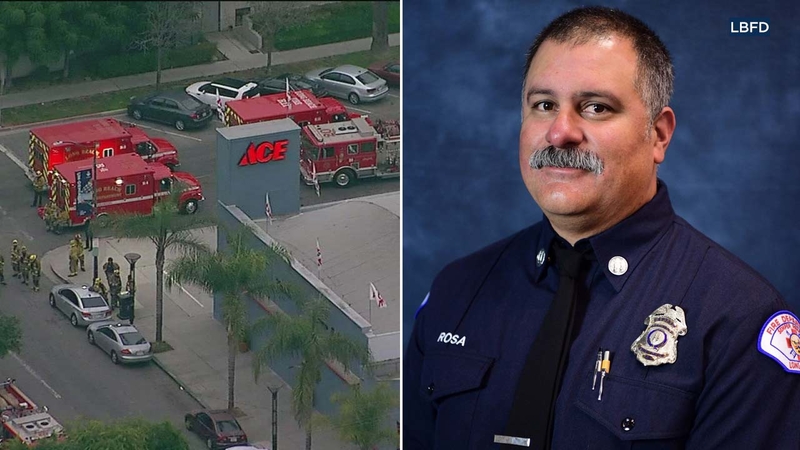 LONG BEACH, Calif. -- A 45-year-old fire captain has died and another firefighter is in stable condition after both were shot and wounded when a gunman opened fire at a Long Beach senior housing facility early Monday.

Fire officials said the firefighter who died was Long Beach Fire Department Capt. David Rosa from Fire Station 10. The husband and father of two was a member of the fire department for 17 years.

Authorities responded to the 11-story Covenant Manor in the 600 block of E. 4th Street in the downtown area of the city at about 4 a.m. over reports of an explosion and fire.

Responding firefighters discovered a fire at the facility, some windows blown out and activated sprinklers -- all as they smelled some type of gas. After extinguishing the blaze, firefighters searched the building and shots were fired, Long Beach Fire Department officials said.

There were reports of an active shooting situation amid the chaos but officials later confirmed the incident was treated as a shooting.

Fire officials said two firefighters were shot and wounded. Rosa was in critical condition and the other sustained non-life threatening injuries. Rosa was pronounced dead at St Mary Medical Center.

Long Beach Police and Fire will be proving additional details to media at 5th and Atlantic at 0650 hrs. with regard to the incident that occurred early this morning at 600 East 4th Street. 2 firefighters were shot and transported to a local area hospital. pic.twitter.com/e3pJqLOrf3

The identity of the surviving firefighter was not released. Fire officials said he remained in stable condition.

"Very saddened this morning, rough Monday morning for all of us. Our fire department and police department are brothers and sisters, so this is hitting us extremely hard," said Long Beach Police Chief Robert Luna.

It is with deep sadness and tremendous grief that we announce that Captain David Rosa has died from injuries sustained from a gunshot wound he sustained at an emergency incident. Capt. Rosa is a 17 year veteran of our department and is assigned to Station 10. pic.twitter.com/np03fecLQb

Police Sgt. Brad Johnson said another person was also wounded and hospitalized. He was described as being in critical condition and in surgery.

Police said a person of interest was detained and a weapon was recovered. The shooting was being handled as a homicide investigation.

Investigators were also looking into whether the incident was an ambush. They added that devices deemed to be suspicious were also located.

"You go to these scenes and you never know what's on the other side of those doors. These brave firefighters went through those doors and, unfortunately, they were met with gunfire," Luna added.